The Rev. Donald Lynn Rogan, professor emeritus of religious studies and former chaplain at Kenyon, died on Friday, Sept. 18, 2015, at the Ohio Eastern Star Home in Mount Vernon, where he was under the care of Hospice of Knox County. A noted educator at the college and seminary levels, he was 85 and a longtime resident of Gambier.

“I am honored that I had the chance to get to know Don over the past two years,” President Sean Decatur said. “His wisdom, warmth and generous spirit made my life, and the lives of all of those whom he touched, much better.”

“For more than 35 years, Don was my mentor and friend,” said Royal W. Rhodes, who holds the Donald L. Rogan Professorship in Religious Studies. “He modeled for me the importance of seeing religion through the many traditions as an important, even crucial, phenomenon in life, and he took seriously the hard questions that religious and non-religious thinkers have grappled with in understanding what it means to be fully and compassionately human. And it was so often in poetry that those ideas were expressed. He gave a ‘voice to the voiceless,’ to those in need.”

After being ordained to the Episcopal priesthood in 1954, Don founded and led several parishes in West Virginia before returning to the General Theological Seminary to complete his master’s degree work on French philosopher and Jesuit priest Pierre Teilhard de Chardin. In 1965, he accepted a dual position at Kenyon, serving both as chaplain and as an assistant professor in what was then a newly organized Department of Religion (now the Department of Religious Studies). Although he left the chaplaincy in 1972, he continued as a faculty member for another 27 years and was department chair for 15 years.

Don’s seven years as chaplain encompassed one of the most fraught times to be a college student in the second half of the 20th century. With the Vietnam War at its peak and a military draft in place, he played a key role as a valued counselor to the College’s young men — and, beginning in 1969, its young women as well. His book Campus Apocalypse: The Student Search Today argued that students of the time were rejecting a complacent society of “security and status and prosperity without soul,” grappling with a search for salvation.

“I remember from my student days a simple one-line prayer that Don gave to end a Kenyon convocation,” recalled Adele Davidson ’75, “almost shocking, and certainly memorable, in its succinctness: ‘In the name of God let us go forth in peace.’ A simple but profound prayer in a turbulent time of war.

“Don was a man of peace, a profound pastoral counselor for those who confronted the draft and the big questions of justice, fairness and peace, someone who never let go of the best of his 1960s ideals,” said Davidson, now the Charles Pettit McIlvaine Professor of English.  “He worked actively to see Kenyon through that time, and he became a wonderful resource person in later years for telling the story of what the College was like back then.”

A measure of Don’s stature on campus at that time was his appearance in the profile of Kenyon in the 1970 edition of the Insider’s Guide to the Colleges. In the book’s list of “must-take” professors was one “Chaplain Brogan,” celebrated not only for his classroom work in religion but also for his draft counseling. The nickname, however appropriate for a man who was as comfortable as a well-worn shoe, fell out of favor after he became a full-time faculty member.

Don made just as much of a mark as a classroom teacher as he did in the chaplaincy. Author John Green ’00 said, “Don was the best teacher I ever had. His wisdom and compassion were such a gift to me, to Kenyon, and to the world.”

“Don was one of my undergraduate professors, then a colleague and a friend,” said Professor of Religious Studies Miriam Dean-Otting ’74. “I’ll always be grateful that I had more than one opportunity to team-teach with him. What a terrific teacher he was!

“Although Don retired 15 years ago, he never stopped being a teacher. He taught one seminar or another annually for years. He offered independent studies, including as recently as this past summer when a current major took up the study of exile and pilgrimage with him. We had many students in common, and when they returned to visit as alumni, they came to see both of us. He will be deeply missed by his colleagues and generations of former students.”

Over the years, many of Don’s students were inspired to pursue vocations in ministry, as well as in education or social services. Rabbi Stacy K. Offner ’77 P’98, of Temple Beth Tikvah in Madison, Connecticut, recalled, “As freshmen, we heard Don’s admonition to ‘never divorce who you are from what you do.’  I’ve kept those words of his in my heart as a guiding force.

“Don’s teaching, which gave me my familiarity with and respect for the Gospels, has made me a better rabbi,” Offner said. “And the way he and his wife, Sally, opened their home to me as a student and to my family as an adult has inspired me to be a better mensch.”

In 1994, Don became just the sixth member of the College’s senior faculty to be presented with the Trustee Award for Distinguished Teaching (now the Trustee Teaching Excellence Award). The citation acknowledged his role in shaping his department’s curriculum “to resonate with the truly global languages of religious experience” through courses in the Biblical field, religion in America and readings of Job and more contemporary religious thinkers such as Martin Buber. At his retirement, according to Rhodes, outside evaluators concluded it would take four faculty members to replicate his offerings.

Among the other prizes bestowed on Don by Kenyon was the Martin Luther King Jr. Humanitarian Award, recognizing his leadership in working with the Black Student Union and his lifelong commitment to civil and human rights. In both 1987 and 1999, Kenyon seniors selected him for the honor of delivering the Baccalaureate address. A number of people remember and refer to one of those addresses — entitled “It was a student who…” —  that focused on the unique contributions students had made to the community and how those contributions awakened their continuing desire to better the environment.

In 2001, the General Theological Seminary conferred on Don an honorary doctor of divinity degree, citing him as “a self-confessed generalist, whose range of interests, sympathy for his subject matter, and sympathy with his students” exemplified his vocation as scholar and priest. Later that year, he was honored with the creation of the Donald L. Rogan Professorship in Religious Studies, endowed by gifts to the College from former students Myer S. Berlow ’72 and Caroline “Coty” Sidnam M’74. At the time, Berlow commented that Don “treaded that fine line between Kenyon being the ‘Magic Mountain' and being part of the world,” helping the College avoid violence in an era of campus riots.

In a February 2002 article announcing the professorship in the Chronicle of Higher Education, it was noted that Don “was a confidant at a time when students were inclined to rebellion, getting stoned and distrusting anyone over 30 … But where the chaplain was concerned, intergenerational reserve tended to dissolve. He organized war protests and helped young men avoid military service.

“On more than one occasion, Mr. Rogan was called on to soothe a student on a bad acid trip.  ‘I used to say I was the chaplain for drugs and the draft,’ he recalls.”

Don retired in 1999. At that year’s Commencement, he was presented with an honorary doctorate in humane letters. The citation for the degree, written and read by Rhodes, stated, in part: “Your lessons, always the poetry of religious discourse, delivered with your trademark honesty and humor, continue to enlighten in words of faith, hope, and the greatest of these, love.”

After the word “emeritus” was added to his title, Don continued to teach on a part-time basis. He confided to friends that the days on which he held his weekly seminars, often in his own home, were his favorite days of the week. In addition, he continued to stay in touch with a wide circle of friends — alumni, faculty colleagues, presidents and staff members — in whose lives he had played a special role.

Don found his way into those lives in myriad ways, from teaching and preaching to serving as a counselor and advocate, from hosting poetry readings with his wife in their home to supporting fellow employees during troubled times. “Don helped me immensely in supporting my career,” Davidson said. “Young faculty members and administrators trusted him to help them negotiate the currents of Kenyon controversy, and students and colleagues alike respected the authority that came from his authenticity as a person. He was a valued friend and counselor whether to a maintenance worker on a picket line or a senior administrator seeking to forge consensus in a crisis.”

And then there were the legendary “Rogan weddings,” over which he presided in the Church of the Holy Spirit and far afield for many alumni and other friends. One of those alumni is Ben Gray ’73. “In his low-key way, Don always exemplified the tenets of Christianity and showed them to be applicable even to a tough crowd of glib and cynical undergraduates,” he said. “So a few decades later, about to undertake an interfaith marriage, I thought of Don Rogan as the ideal officiant. His unshakeable faith and good will would be sure to help carry the day and to deliver what both Kathy and I wanted. And that’s how it happened.

“When we look back at our marriage, there is Don, standing before us, giving us full faith and credit,” Gray continued. “He was also the natural choice for baptizing our children, and he graciously handled that as well.”

The Rogans’ “hospitality and open board” created happy memories for Davidson. “Continual celebrations of poetry and good food, always making room at the table for one more person when someone needed company, this miracle of loaves and fishes has spread and continues to spread, through our entire community, in the enriched social bonds that the Rogans’ kindness has fostered,” Davidson said. “And Don’s wonderful sense of humor leavened all conversation.

“Spiritual nourishment was also on the table,” Davidson added. “Teaching for Don grew naturally out of his vocation as priest. He thrived on intellectual stimulation, combining inquisitive involvement with compassionate conviviality. He reached out to the struggling and invisible student, and not infrequently turned those students into successful ones by his careful mentoring. He helped his students find a unique voice, and he worked to give all faiths and perspectives a chance to be heard.

“Don inhabited the intersection of profound spiritual questioning and compassionate spiritual nurturing. Students and friends flocked to this mental location, and they will return again and again in their memories and imaginations.”

Don is survived by his wife of 61 years, Sarah “Sally” Larew Rogan, a retired school teacher, whom he married on Aug. 25, 1954, in Beckley, West Virginia; a daughter, Lynn Rogan; sons Edward Rogan, John Rogan ’83 and Peter Rogan; 10 grandchildren; five great-grandchildren; and his sister, Jane Rogan Hoy. The funeral, conducted by the Right Reverend Mark Hollingsworth, Episcopal bishop of Ohio and an ex officio Kenyon trustee, will take place on Saturday, Sept. 26, 2015, at 11 a.m. in the Church of the Holy Spirit. Burial will follow in the College cemetery. 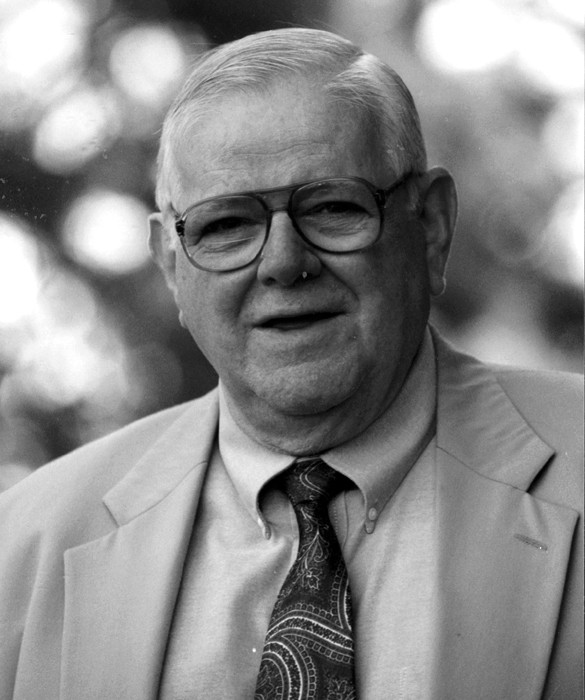 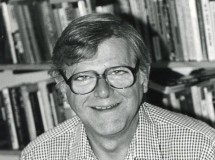 Professor Emeritus Don Rogan, pictured in a 1986 edition of the Reveille. 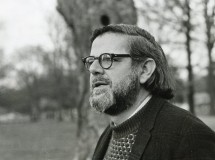 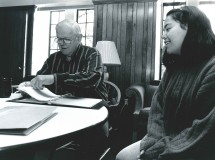