After months of fundraising, Kenyon’s chapter of the fraternity Beta Theta Pi (Beta) donated 20 musical instruments, worth a total of $3,800, to the East Knox Local School District.

Beta Vice President Wyatt Ernst ’18 first thought to start a jazz program at Knox County schools last spring break. He spent those weeks volunteering at New Orleans’s Preservation Hall, an organization that teaches jazz in schools without music departments. Many of New Orleans’s public schools lacked music programs due to a lack of funding, Ernst said, and he saw a similar situation in Knox County.

“If the Preservation Hall is doing this in New Orleans, why can’t I do this in Knox County?” Ernst said.

The Betas raised about $1,000 from a fundraiser at the Village Inn over Family Weekend, in mid-October. The rest of the money came from nearly 20 outside donors Ernst knew from his work with Preservation Hall. In total, Beta bought five flutes, five clarinets, five trumpets and five trombones for the East Knox Music Department.

“The school was overwhelmed with this generosity,” Jessica M. Busenburg, treasurer of the East Knox Local Schools, wrote in an email to the Collegian. Busenburg said the instruments would allow low-income elementary and middle schoolers to participate in the school band.

Ernst said the Betas’ involvement will not end here. As a next step, the fraternity plans to get the greater Kenyon community involved in East Knox’s music program. Ernst is coordinating with Professor of Music Ted Buehrer to bring the Kenyon Jazz Ensemble into East Knox classrooms next fall. There, they will help East Knox Band Director Elijah Henkel teach children to play the instruments.

“We’re hoping once we help these students learn instruments,” Ernst said, “we can reignite the jazz program at East Knox.” 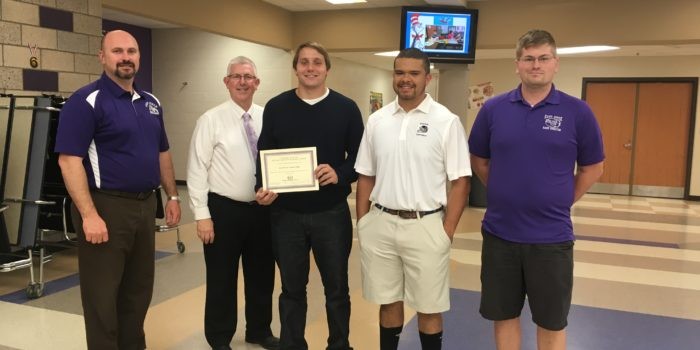