When a Latin American poet asked me to look over some recent translations of his work into English, I critiqued them as only an inexperienced yet ambitious beginning grad student would. "These are all right, but I could do better."

He responded, "Go ahead"—and I suddenly realized what I'd gotten myself into. Thus, somewhat serendipitously, began my career as a literary translator.

As a long-time foreign language learner, I had certainly attempted translation before. I tried my hand at it in college, when I could not for the life of me understand a César Vallejo poem assigned in a Spanish course. At a very basic level, I simply wanted to appreciate the text more profoundly. For me, translation continues to be, above all else, a search for meaning.

I am especially drawn to the challenges of poetry. Translating poetry satisfies on so many different levels. It gives the closet poet in me new possibilities for writing creatively. It lets me inside poets' heads, where I'm happiest, immersed in their sensibilities, their obsessions, their worlds. As a consummate problem solver, I relish the prospect of a puzzle to be taken apart and put back together again.

When I face a text, I begin with what may seem the simplest step. What does it mean in the most literal sense? But "literal" translation isn't necessarily easy. Consider the surrealistic imagery created by the outstanding Argentine poet Juan Gelman. Translating The Poems of Sidney West (in which Gelman invents an English-language poet and "translates" his work into Spanish), I encountered lines like "It began to rain cows."

How to proceed? If you duplicate the experimentation of the original text, readers may see your work as poor translation. There's always the temptation to try to make sense out of something that might not be clear even to the native reader, just to save face.

One poem in Gelman's book has the lines: "not so for the tiny birds [...] that sang and sang / now blind / much blind." The use of "much" is grammatically incorrect, in both Spanish and English. But I chose to keep it. In another verse, "sap sap coli pic david cassidy would say at the feet of his melancholy in springtime oh," I maintained the nonsense-syllable neologisms that begin the original line, when I might have used a phrase better known to the English language reader, like "la-di-da" or "dum-di-dum." Why?

The answer goes far beyond the English reader's comfort level and familiarity with certain terms, or my own reputation as a translator. Gelman's very poetic is based on a defiance of traditional Western modes of expression. Preserving that aesthetic is what matters to me most.

In turn, my choices, seemingly trivial, reflect my primary goals as a translator. At a textual level, I want to ensure that the poem's meaning (explicit or not) is represented faithfully, even if that isn't "standard." More generally, I want to contribute to bringing this kind of rebellious writing, which is often overlooked, to a larger audience.

Translation is made up of these apparently minor yet time-consuming choices that speak to the complexities of poetic expression. Those first texts I translated as a graduate student were only recently published as The Infinite's Ash. The poet who wrote them—and defied me to act on my words—is Víctor Rodríguez-Núñez, now my husband and colleague, as well as my collaborator on many translations, including The Poems of Sidney West.

Experience has helped me wrestle with the difficulties of translation, as have Internet resources like online dictionaries. But the essential task, of capturing meaning—the literal and the literary, verbal sense and linguistic artistry—will always be a challenge. Anything that's meaningful usually is.

Katherine Hedeen is a 2009 National Endowment for the Arts Translation Fellow. Along with Kenyon colleagues Janet McAdams and Víctor Rodríguez-Núñez, she edits Salt Publishing's Earthworks Series of indigenous writing and Latin American poetry in translation. 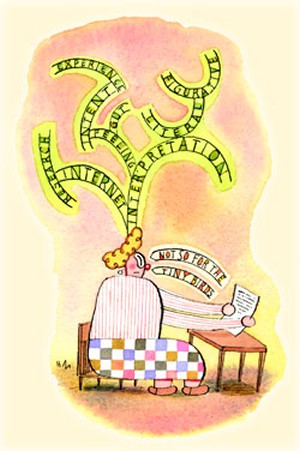