Listening to the new President of Kenyon College, the other day, I found myself remembering The Sun newspaper's famous response to the young Virginia O'Hanlon, who was worried that her friends kept saying there is no Santa Claus. Similar to little Virginia, we are beset across the nation with naysayers and non-believers, in the form of reports and fears that there is no value in a degree in English or anthropology or, frankly, anything that doesn't involve some form of engineering or technical skill set that would put a student directly into a specific career path.

I won't rewrite Frances Pharcellus's timeless column to rebut the proponents of technocracy, as Kenyon President Sean Decatur did a more than capable job of that Friday at The City Club of Cleveland.

It's worth pointing out a few of the highlights of his address. First, he noted that every time we face an economic crisis or downturn, the Henny Penny routine starts up again: the sky is falling, we say, as if for the first time, and we should only be training people for jobs, not for critical thinking. But the point he made that resonated strongest with me was that in every round of liberal arts doubting, there are the inevitable stories of the English major working at Starbucks or the French Lit major employed as a secretary. While they're true, they typically only examine the first 18 months after graduation, not the careers that typically follow. He went on to cite recent coverage of formerly under-employed liberal arts grads in the early 90s. Today, they're international consultants, business owners, and in every way, successful.

As someone who majored in English a couple of decades ago, I find this all very gratifying. 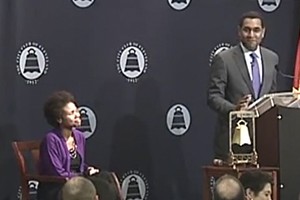