The annual Honors Day recognition of student, faculty and alumni achievement included the announcement of the Trustee Teaching Excellence Awards for Paula Turner, professor of physics, and Pashmina Murthy, assistant professor of English.

Turner, who has been a faculty member since 1992, is the chair of the Department of Physics and works with Kenyon students at the Miller Observatory to measure and model pulsating variable stars. She also directs a two-week summer program for undergraduates who do research at the Mount Wilson Observatory in California.

A senior who nominated Turner for the honor wrote, “I'm fairly certain that I spent more time in her office during office hours this past semester than I spent in class. She's ridiculously willing and available to help students individually or in groups, even at strange hours of the night, and the help she gives is invaluable.”

A first-year student wrote of Murthy, “On one occasion, she asked me to come to her office hours. I panicked. I thought of my recently submitted essay and imagined sitting through a meeting riddled in her disappointment. But I went. She looked at me and asked, "How are you?" I replied I was fine. I waited for the guilt trip. She followed up that I had been unusually quiet in class and had been looking particularly harried. She was calling the meeting to check on me personally, not academically. She cares for her students as academics and human beings.”

The Kenyon College Board of Trustees established the Trustee Teaching Excellence Awards, which carry a $5,000 stipend, in 1999 to promote excellence by raising the visibility of outstanding instruction.

Dhanani was awarded an honorary doctorate of laws for a distinguished career in foreign service. She is director of regional and security affairs in the Bureau of African Affairs of the U.S. Department of State. She was deputy chief of mission in Libreville, Gabon, and Harare, Zimbabwe, and from 2010 to 2013 was U.S. consul general in Hyderabad, India.

Rinka, who will receive an honorary doctor of humane letters degree, is a retired English teacher and member of the Kenyon Athletic Association Hall of Fame and Ohio Basketball Hall of Fame. At Kenyon he set almost every college and conference shooting record — many of which still stand — and in his senior year won the Frances Pomeroy Naismith Award for exceptional basketball players under six feet tall, becoming the first non-Division I athlete to do so. He coached several years at Brandeis University and has taught high school students in North Carolina for many years. 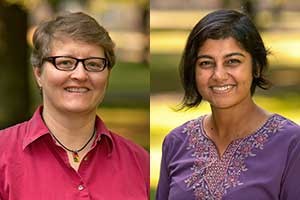