Sutton Amthor ’21 is an Arabic and Asian & Middle East Studies double major from Bruceville, Texas. Scout Crowell ’20 is a psychology and Spanish double major from Ortonville, Michigan. Both have been awarded this semester’s Franklin Miller Awards for their noteworthy contributions to the College’s academic environment. The award was established by Edward T. “Chip” Ordman ’64 in honor of the late Franklin Miller Jr., a beloved professor of physics.

Over lattes at Wiggin Street Coffee, we spoke with Amthor and Crowell about the Franklin Miller Award and their achievements at Kenyon.

What did winning the Franklin Miller Award mean to you?

Scout Crowell: When I got the email, I was really excited. As a first-generation student, any kind of award that I win not only validates that I do deserve to be here, and it’s always nice to be recognized for working hard, but it also means a lot to my family. Anything like that, I get so excited, I call my mom. And my dad — my dad’s a truck driver, and he always wears his Kenyon Dad shirt under his uniform, because he’s so excited that I go to college.

Sutton Amthor: Your dad wears that shirt all the time?

Crowell: Yeah, he literally will go up to people, like his coworkers, and say, “Y’all, my daughter just won this award; she goes to Kenyon College.” He gets so excited. And his Kenyon Dad shirt is his favorite.

And Sutton, how did you feel when you got the email, were you surprised?

Amthor: I was surprised. I hadn’t heard of it before, but I immediately went and looked it up, and saw all the past winners, and was like, “Wow, these are really cool, great people.”

Amthor: I’m a flag bearer, so I go to the Honors Day ceremony every year and watch everyone get awards. And it’s inspiring, but I’ve never really thought of myself as one of those people who get the awards. And just to have the things I do be recognized and validated, it gave me a shift in the way I think about myself and the work that I do.

Scout, can you say a little about the Open Doors program that you lead as president?

Crowell: The program started out as a way to offer college prep courses to Latinx students in Mount Vernon. I’m passionate about educational equality and allowing low-income students and students of color to have an easier access point to institutions of higher education, not only at a state level but at private liberal arts colleges like this. My education is very different from that of any of my peers who went to public universities in Michigan, for example. I have a lot more contact with my professors and a lot more opportunity.

This program provides a place for low-income students to feel that they’re valued by someone, because these are students who’ve been disenfranchised by the educational system for a long time. My interest in psychology is really useful in this, in that there’s nothing that can really motivate someone like feeling that they’re valued. The improvement we’ve seen in some of these students, whether its test scores or excitement to learn, is huge, and there’s nothing that makes me happier.

Speaking of how people end up at college: Sutton, you grew up in rural Texas. How did you find Kenyon?

Amthor: I’m from a town smaller than Gambier that’s about 20 minutes outside of Waco. It sounds kind of similar to Scout’s experience, honestly. I also grew up in a pretty low-income area, and my school dealt with a lack of resources by highlighting the kids who are going to go to college, and these other kids won’t. I went to a K-12 school; my graduating class was 56 people, and 35 of those I knew from the time I was in kindergarten. Going to an out-of-state private school like Kenyon is incredibly rare where I went to high school. Of my peers who went to college, they all went to large, public state universities. So when I was preparing for college and putting together my application, from very early on, I knew I was doing something that no one else was doing.

Crowell: That’s so cool to hear you talk about that because it’s so similar where I’m from.

Amthor: At Kenyon in those first few days, everyone was talking about what they did in high school. And you feel like, “Oh no, why wasn’t I in an orchestra that traveled to Europe?”

Crowell: I volunteered at the library; I thought that was cool.

Amthor: I was the editor of my high school yearbook.

Crowell: And we thought that was awesome! This is application gold!

How do both of you balance all the different things that you do on campus?

Amthor: Obsessive scheduling. Every day I make a to-do list, and I try to stick to it as much as possible. I also deal with it by stressing a lot.

Amthor: But at the end of the day, it’s a lot of things that I like doing, so even though it’s stressful and I often feel like I don’t have enough time for things, I don’t want to give any of it up.

Crowell: I definitely agree that my planner is … wow, it’s something else. Yes, I definitely love list making, but I’m also a student athlete, so that’s another three hours out of every day.

Crowell: Cross country and track. That’s how Sutton and I knew each other. I’m actually the team manager and student coach this year, because I had a long-term injury so I can’t run anymore. But I’m still just as involved, if not more. A lot of [time management] comes down to just being disciplined, but also understanding that there is balance, because it is very easy to get over-involved in what we’re doing, and lose track of things like adequate sleep, because you’re so dedicated to other people and providing for the community. You have to take care of yourself. 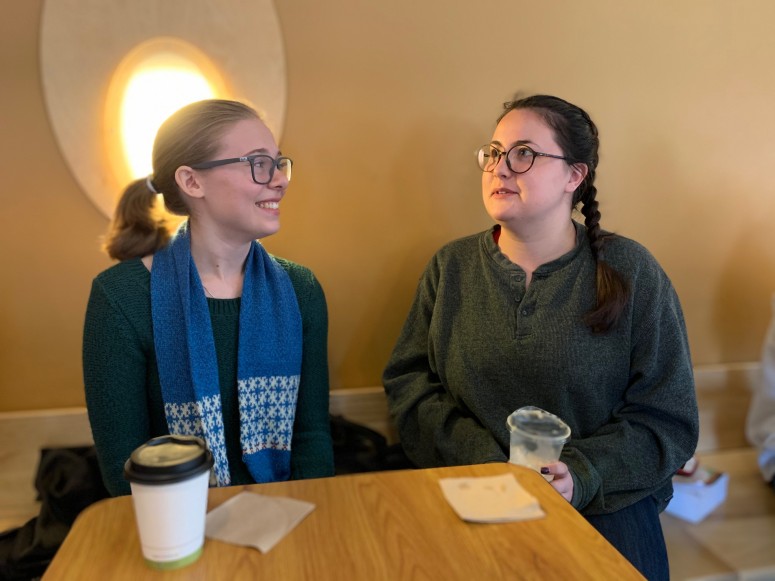