One of our very own, Adama Berndt ’17, has released his first rap album. While he’s no stranger to performing, rap – or any music for that matter - hadn’t become his outlet until he turned 16. A jokester by nature and association (a member of the beloved stand-up group Two-Drink Minimum), Adama started rapping on a whim during his final weeks of his senior year in high school. It was there, in his hometown of Bloomington, Indiana, is where he met a few mutual friends with access to a recording studio. He began writing and recording music almost every summer, but during these past couple of months he was able to finalize his vision and create an album ready for release.

The album, "Haunted Laundromat," was almost entirely made this summer. When asked about his writing process, he remembers his drive from Kenyon back to Indiana: “I’d just be on the highway sitting alone by myself just freestyling for like five hours...by the time I’d get home my voice would be hoarse. I’d be listening to beats over and over again and I’d have these moments in the car where I would just need to say or write it. It’s a compulsion almost.”

But again, Adama is quick to admit that he wasn’t always this interested in music. He notes, “As I kid, I actually hated rap music. My brother would play rap music when I was twelve – and I didn’t even listen to rap until I was almost sixteen. But when I was 12, my brother would play it and pound it. And it was really crude and offensive, and I was like ‘Robert turn that down’ – like a grandpa 12-year-old.”

It was actually Kanye West, specifically his song "Heartless," that turned him on to rap music. He looks back on that time now and remembers, “It’s so stupid and one of the worse ones it could be but 'Heartless' kind of really got me. I mostly listened to reggae when I was younger, but I guess 'Heartless' was the one that turned me around – which is just ridiculous.”

The album is eight tracks, and can be found on Soundcloud. Adama notes that some songs that are important to him include "Not Like Her" and "Troll On." To keep it in the Kenyon family, the "Creepin’" instrumental was produced by Pauly Daniels and "The Jeopardy" beat on the song "Me and Alex," by recent alumnus Dylan Jones-Tuba. 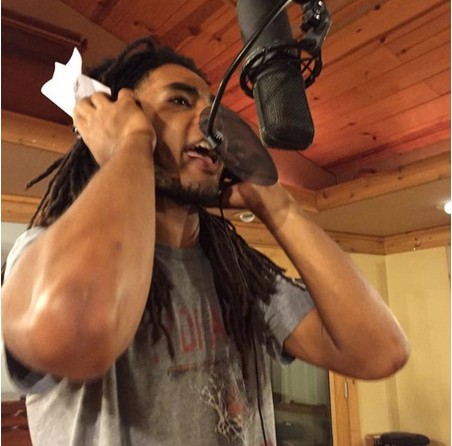