A reunion of Kenyon football players Saturday, Sept. 10, included one player who huddled with the Lords when Franklin D. Roosevelt was president.

Philip Doughten ’43 played defensive end and was on a team that went 7-2. But he wasn’t recruited.

“I was signing up for classes, and there was a sign that said, ‘If you want to play football, be at the gym on Tuesday.’ And that was that,” Doughten said.

The Lords in those days played on a field next to the railroad tracks (what is now the Kokosing Gap Trail) and usually had about 100 spectators, he said. They didn’t throw too many passes. Doughten still has a program from a 1941 game in which no player on either team weighed more than 200 pounds.

Doughten played at 168 pounds and blocked a few punts. “I had very quick reflexes, so I was good when they snapped the ball, but when it came to long-distance running down the field, everyone could pass me,” he said.

The 95-year-old remembered a game that did not go well for the Lords. At that halftime, his coach was roaring about the team’s lack of focus.

“He said, ‘You know the trouble with you so-and-sos is you spend too much time on extracurricular activities!’ ” Doughten chuckled.

The retired doctor from New Philadelphia, Ohio, played golf until this year. He enjoyed connecting with fellow fans during the football reunion weekend and sat in sun-drenched bleachers with his wife, Molly, for the Lords’ entire 45-16 win over Oberlin College.

The action-filled game and Kenyon’s 490 yards of total offense pleased the 56 football alumni at the reunion. Several members of Kenyon’s undefeated 1972 team were in attendance. The tailgate party before the game drew 177 alumni, parents of current football players and guests.

David Rose ’81, who played for the Lords and helped promote the football reunion, said after the game, “It’s humbling and heartwarming to be here again with all the fellas from so many generations, including ones in their 80s and 90s. Mentally, you just get filled up with the fellowship. I haven’t thought about business all day today!”

Rose was honored at halftime with remarks from President Sean Decatur and a framed jersey. Decatur thanked Rose for sponsoring many Kenyon interns at Davenport & Company in Richmond, Virginia, where Rose is a senior vice president, and for Rose’s long-standing involvement with the regional alumni group based in Richmond.

Rose received the College’s Distinguished Service Award in 2006 and the 2013 Burchell H. Rowe Award for his support of Kenyon athletics. After the victory over Oberlin, Rose was on the field eagerly congratulating the coaches and players — and even spent a long time encouraging a bright-eyed recruit to come play for Kenyon. 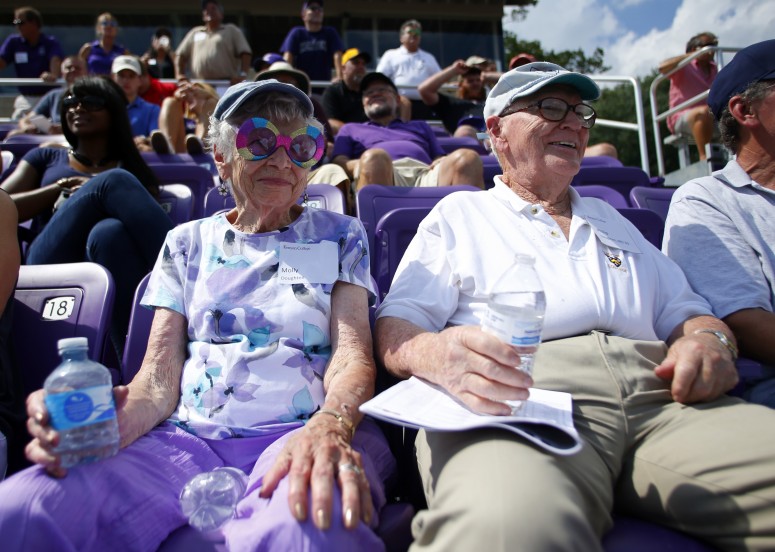 Philip Doughten '43, right, enjoys the Lords' 45-16 win over Oberlin with his wife, Molly.