Snow and ice coated all of Kenyon’s campus on the afternoon of Sunday, Feb. 11, but the greenhouse was as warm and bright as ever when I met Meaghan Haling ’19 to look around. She had been caring for the plants for a while before I arrived. “When it was coming down in here earlier with the rain, it sounded great in here,” she said.

Haling is one of two students employed under Assistant Professor of Biology Chris Bickford to care for the space’s current collection. The job involves watering, repotting and sweeping, among other duties. The greenhouse holds a variety of plants for display and research. Biology students, the Kenyon Farm and the Brown Family Environmental Center (BFEC) all rely on its controlled climate and resources.

Haling began working at the greenhouse during her first year at Kenyon. Because she was a classics major, she was surprised when she got the job. The greenhouse often employs students from disciplines other than biology. Bakdaulet Baitan ’20, the other student employee, is an economics major. In addition to working with Bickford, Haling and Baitan regularly collaborate with Biology Materials and Laboratory Technical Director Darcy Blankenhorn, who manages the greenhouse and oversees the equipment, soil and other materials used in the space.

The first thing I noticed upon entering the greenhouse is an array of plants directly to the left of the door. This is the teaching collection, which includes an assortment of orchids, canopied by a water-soaked mesh tarp to keep the air around these tropical plants damp; a table filled with cacti; an extensive succulent collection and several miscellaneous plants. Haling’s personal favorite is a red hibiscus plant, which had one flower in bloom when I returned the next day.

One of the collection’s more unusual features is a group of pitcher plants, which are carnivorous and produce jug-shaped leaves that capture and dissolve bugs for nutrition. “It’s terrible to say, but you will find bug sludge inside, so they are catching something,” Haling said. The plants came to Kenyon about two years ago, when a student used them for a project during her senior year. “These were her babies,” Haling said.

Another noteworthy specimen is a plant so large that it is housed in its own room. Known as “the mother plant,” the 40-year-old Agave americana, which is commonly called the century plant, was donated to the department by Professor Emerita of Biology Kathryn Edwards. In its time at Kenyon, it has spawned several offshoot plants, one of which is 20 years old and remains in the main area of the greenhouse with the teaching collection.

“Just the whole concept that this has been sitting here for 40 years and it’s not done yet is very wonderful,” Haling said. The century plant will return to its original home with Edwards in the next few weeks.

Bickford and Haling agree that the cacti are the hardest plants in the teaching collection to work with. “If I’ve been stabbed by a plant needle, it’s a cactus,” Haling said. “That’s about where I’m at with it.” Bickford added, “They’re armed. They’re well defended through evolution.”

The biology department first introduced a greenhouse to Kenyon when they tore down the old biology building and built Higley Hall. This occurred in 1969, the same year that the College first began admitting female students. The space was rebuilt with updated climate control technology when Higley was renovated in the late 1990s. Since then, the greenhouse has seen a variety of student projects, contributions to the teaching collection and plant sales. In 2001, it had a week-long sale of aloe, jade and other species.

Today, the greenhouse is divided into three primary sections — the teaching collection, potting room and space used by those unaffiliated with the biology department. The latter is further separated into sections for experiments under the biology department, as well as seed starting for the Kenyon Farm and BFEC. Bickford consolidated the teaching collection dramatically at the beginning of this academic year, selling much of it to faculty in staff to dedicate more care to only a few plants from each species. Since that time, he and Haling have been working to catalog the plants so they can be used for courses when professors or students want to look at a real-life example.

Ryder Sammons ’19 works under Bickford as an assistant teacher for his “Environmental Plant Physiology” lab and began handling plants in the greenhouse for the course in the fall. Right now, the class is growing a variety of Encelia, a desert plant which does not need a lot of water. “If you were to go into the greenhouse and look at the plants on the table, they would be the ones that would look like they’re dead,” Sammons said.

Working in the greenhouse is not only a chance for Sammons to get paid to grow plants and help other students, but also a learning opportunity. “I’m learning what does work and doesn’t work,” he said. “Rather than listening to what [Bickford is] saying, [I’m listening to] more so how he’s saying it, and how he’s presenting the information to the students, and whether the students are getting it.” Sammons hopes to become a high school biology teacher after graduation.

Sammons added that being in the greenhouse is especially great during the dead of winter. “The greenhouse is bright, it’s filled with plants and it’s warm. It’s a great place to go if you’re feeling the winter blues,” he said.

The greenhouse is located on the back end of Fischman Wing in Higley Hall and is open Monday through Friday from 8 a.m. to 5 p.m. 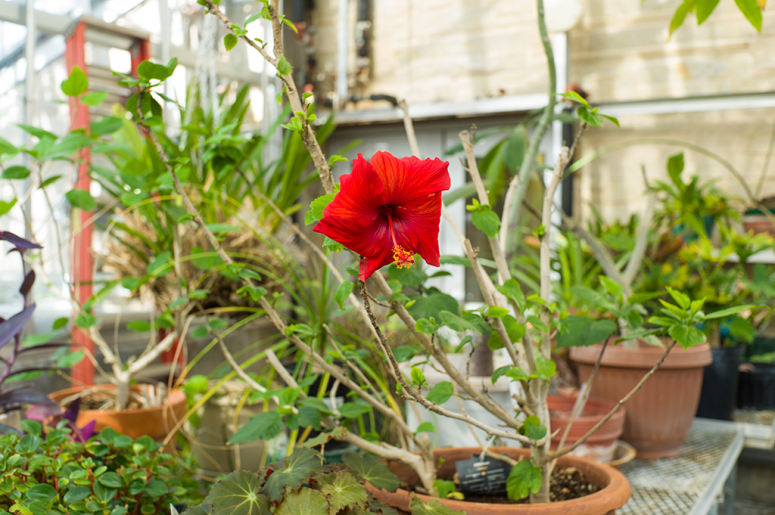 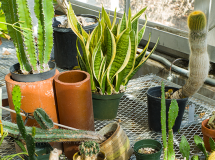 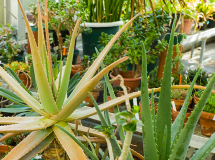