Jonathan Tazewell ’84 P’15, the Thomas S. Turgeon Professor of Drama at Kenyon, will debut his feature film “Gotta Get Down To It” in a series of special screenings April 18–20 at 8 p.m. in the Hill Theater.

The film is the product of a yearlong effort led by Tazewell in collaboration with students, staff, alumni and members of the Knox County theater community. It is the first original feature film to be produced by Kenyon’s film department, which established its film major in 2011.

“Making this film with my students, former students, friends and colleagues was a dream come true,” said Tazewell, who wrote and directed the film. “We designed the project as an immersive educational experience for our students, but the collaboration with film professionals from the Kenyon family and the local community made the production even more special.”

“Gotta Get Down To It” tells the story of a young professor at fictional Sedalia College who, with her students, becomes embroiled in an intense political protest sparked by a controversial speaker who visits campus. Inspiration for the plot came from recent public discourse regarding free speech at college campuses across the country.

Throughout the production process, Kenyon students played a critical role both in front of the camera and behind the scenes, working as actors, crew members, camera operators, costume designers, film editors and more. This hands-on experience working with members of Knox County’s theater community as well as seasoned alumni gave students invaluable opportunities to grow their skills and expand their networks in the film industry.

“This project is a defining moment in my Kenyon career,” said Jesseca Kusher ’19, a biology and film double major from Spartanburg, South Carolina, who worked as an assistant director on the film. “That so many generations were involved and so many alumni came back to participate speaks to the power of Jon’s mentorship.”

Audiences to the screenings at Kenyon this month will be treated to a sneak preview of the film, which is undergoing final adjustments. Each screening will be followed by a Q&A with members of the cast and crew. After additional sound mixing and film editing, Tazewell plans to bring the film this summer to various film festivals around the country. 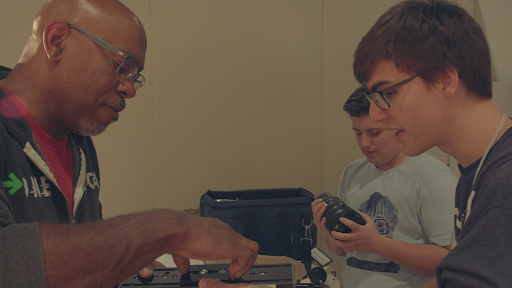