New York Times best-selling author and Kenyon alumnus John Green ’00 spoke at Rosse Hall at 7:30 p.m. Monday, Feb. 10. The event, called “Thoughts on How to Make Things and Why,” was closed to the public, but was livestreamed to Brandi Recital Hall on campus and was able to be viewed live online at johngreenlive.kenyon.edu. People could send questions to Green via Twitter before and during his talk by using the hashtag #TweetJohnGreen.

Green’s solo novels include Looking For Alaska, Paper Towns, An Abundance of Katherines, and The Fault in Our Stars (which has been made into a movie to be released in June). While his genre is young adult, his writing has won acclaim with critics who recommend his books for readers of all ages.

In addition, Green is known for the creation of a community of “nerdfighters” who “fight for intellectualism and to decrease the overall worldwide level of suck.” Nerdfighter videos that he makes with his brother, Hank, can be viewed on their YouTube channel, vlogbrothers. 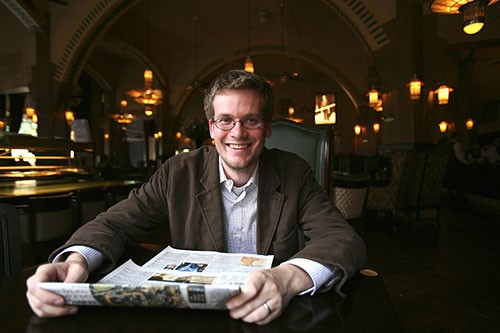