Ask the demographers and they’ll tell you our 20-something children are millennials. But over the years I’ve come to think of them another way. They are “Generation HP.” Partly, with a nod to Hewlett-Packard, for being technologically savvy. But mainly because they are the kids who came of age lugging around fat novels about a certain boy wizard that were published one by one as they grew up. These weren’t books, like the Lord of the Rings or the Chronicles of Narnia, that readers of my generation inherited from enthusiasts who came before. The volumes of Harry Potter were fresh off the press for this lucky cohort, often thrust into their hands — it’s hard to believe this happened, so magical it was — at midnight book release parties.

Obviously, it’s easy to think of Hogwarts when you’re at Kenyon. Peirce Hall made headlines for its resemblance to the wizarding school’s own dining hall. (Peirce just has that old-timey feel: it was the setting for a medieval banquet in September 1981, the day I met my future wife, Pam ’83.) Philomathesian Hall would be the perfect place to stumble upon robed students and teachers practicing spells. Add some fog to a dark evening and you’ll be looking over your shoulder for floating dementors as you pass through the Gates of Hell. This is all in the imagination, of course. And then our daughter, Emma ’17, arrived in Gambier 30 years after our graduation.

As devotees of the Harry Potter books know, author J.K. Rowling envisioned the last scene of the last novel, Harry Potter and the Deathly Hallows, years before its publication. In that passage, set 19 years after the conclusion of the series, the children of the main characters — Harry, Ron, Hermione, even Draco Malfoy — have come of age and are themselves off to Hogwarts. Tidy, and perhaps a bit too predictable, I thought, when I first read the scene. Tidy, indeed. Today, Emma lives next door to Ellen Corcoran '18, the daughter of my sophomore and junior year roommate, Everard Corcoran ’82. Recently, Emma met Henry Williams ’19, the son of my freshman year roommate, Kevin Williams ’83. Colleen Kelley '18, the daughter of a cross-country teammate of mine, Steve Kelley ’84, is also a runner. The son of our friends John Mackessy ’82 and Linda Day-Mackessy ’83, Ben Mackessy '16, is a Kenyon senior, while the son of classmate Michael Gee ’83, Evan Gee '18, is a sophomore. Two of our classmates are even teaching at Kenyon now — Nancy Powers ’83 and Jonathan Tazewell ’84 — though oddly they chose the pedestrian fields of political science and drama over Potions and Care of Magical Creatures. Meanwhile, in the best tradition of Hogwarts Headmaster Albus Dumbledore et al., several of our own professors, including religious studies professor Royal Rhodes, Spanish professor Linda Metzler and classics professor emeritus Bill McCulloh, are still at Kenyon instructing budding wizards and witches. Of course, it goes without saying that Kenyon regularly fields real-life Quidditch teams. The result is that these days, my alma mater doesn’t just remind me of Hogwarts. With its residence halls and classrooms and walking paths crowded with our children and those of our classmates, it’s become Hogwarts.

Life imitating art this way has enhanced our Kenyon 3.0 parental experience. Kenyon 1.0, of course, consisted of our own tenure on campus when we somehow survived four years on the Hill without email, cell phones or Netflix. Kenyon 2.0 involved periodic visits with young children in tow who were fascinated, absolutely fascinated, to hear about our halcyon days in Gambier. (“Daddy, tell us again how you napped in the math library when you were supposed to be reading Aeschylus!”) Now, on our third go-around, we’re rediscovering Kenyon through not just our daughter but the daughters and sons of some our oldest friends and acquaintances. And there may be more to come. Harry Potter’s parents, Lily and James, were also graduates of Hogwarts. Perhaps we’ll be back to encourage more descendants someday. But first they’ll need a name. 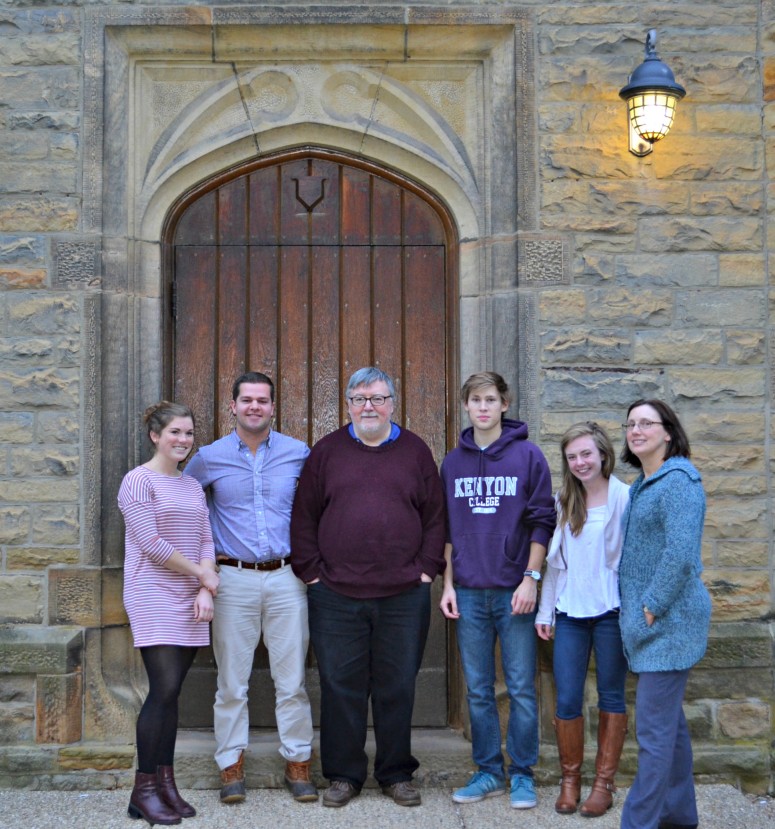