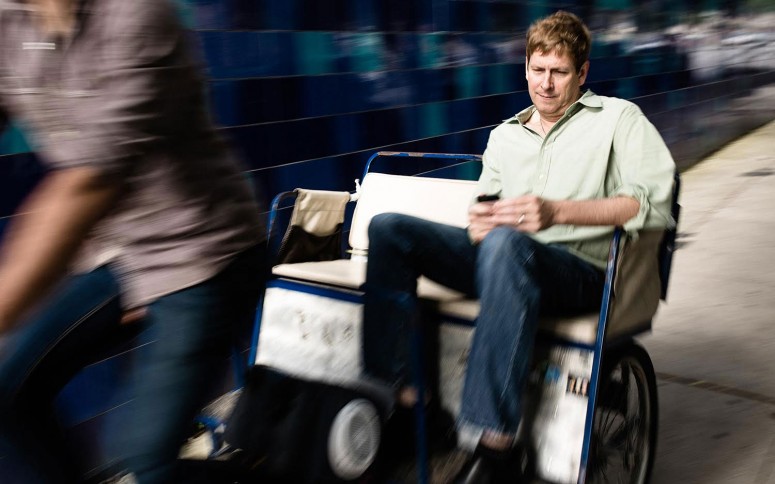 He’s in charge of a major conference known for introducing technology and must-have apps to the world. His event is credited with bringing fame to Twitter and launching the social network Foursquare. He’s responsible for organizing more than 2,500 speakers in more than a thousand panels at almost a dozen venues, and top news outlets from around the globe will send reporters to cover what happens in those rooms.

How will he keep track of all these responsibilities? On a crumpled sheet of 8.5-by-11-inch printer paper.

That’s the method Hugh Forrest ’84 uses in his job as director of SXSW Interactive, an annual celebration of all things entrepreneurial, creative, and tech. Forrest has run the event, held in Austin, Texas, every March since its founding in 1994.

Presiding over this meeting of the minds of the world’s elite tech talent, Forrest insists that he himself isn’t particularly tech-savvy. In addition to tracking his schedule on a piece of paper, he prefers to send emails with his worn Macbook rather than tapping them out on his iPhone.

“My tech expertise ended at about the Mac Plus era,” Forrest, an Austin native, said.

In fact, it was a Mac Plus Laser Writer that first got Forrest the gig at SXSW. After graduating from Kenyon, he moved back to Austin and started an alternative publication, the Austin Challenger. With the help of his father, Forrest bought the computer to avoid high typesetting costs.

In 1989, the year Forrest became involved with the earliest incarnation of SXSW — just a music festival at the time — personal computers were a rarity; only 15 percent of households had them. The festival organizers were searching for someone who had a computer they could use. Forrest, who knew the organizers through his journalism experience, offered to lend his machine. In 1994, after a few years of splitting his time between SXSW and various Austin newspapers, Forrest went all-in on his current job, leading SXSW Interactive and branching out from the music festival.

“We were living off ramen and peanut butter and jelly sandwiches, and South by Southwest was the regular paycheck, so as I was getting a little bit older, that was alluring,” Forrest said.

He has put the ramen lifestyle behind him, transforming SXSW Interactive from an intimate conference with hundreds of participants into a sprawling festival attracting tens of thousands and worldwide attention.

Steady As It Grows

In its early days, Interactive was just a small presence at SXSW, overshadowed by the main moneymaker, the music component. The staff consisted of Forrest and a couple of others, holed up in a group of houses that served as offices for the SXSW organization.

“To keep it going was quite a struggle,” remembered Shawn O’Keefe, who worked at Interactive from 2000 to 2014. “And because of how quickly the event grew, it didn’t matter how many people we added [to the staff] — we were always creating more work for ourselves.”

“It felt like we were yelling into a dark room and no one was listening,” Forrest said.

SXSW Interactive slowly became established as a must-attend conference for techies, then charged to fame in 2007, when Twitter used the event as a launchpad for its new service. This year’s festival drew upward of 30,000 people from more than eighty countries. SXSW Interactive has moved beyond tech panels and now includes sessions on food, fashion, and sports, plenty of networking opportunities, and even a table tennis tournament.

The success of the festival has been a boon for Austin — last year, the event injected an estimated $315 million into the city’s economy. During the 10 days of the entire event that also features film and music components, Sixth Street, Austin’s historic entertainment district, transforms into a massive block party, and traffic paralyzes the streets surrounding the Austin Convention Center, making pedicabs a favored travel option.

For all the buzz that SXSW has generated, the festival has its critics, who say the event is getting too large, too unfocused, and too branded. (Corporate slickness is certainly in evidence: flashy lounges sponsored by Mazda, McDonald's, and Capital One scream for attention as soon as one enters the convention center.) Though SXSW used to be a mainstay of those looking for the next hot innovation, industry insiders are instead migrating to alternate festivals.

The criticism doesn’t concern Forrest, who notes that organizers prefer to keep the focus on the creative community.

“The bottom line of SXSW is bringing together creative people,” Forrest said. “Whether that be a writer, a painter, someone from the sports world, that’s what people like in an event like South by Southwest: seeing the thought process behind someone who’s doing something incredibly innovative, that moment of inspiration of, ‘Wow, that’s really amazing.’ ”

Holding Court on the Hill

Forrest’s success hasn’t surprised those who knew him as a student at Kenyon.

“He was very absorbed and eager to learn,” said Professor Emeritus of English Perry Lentz ’64, who taught Forrest, an English major. “Very few seemed as quiet and reflective as he was. Very little seemed to escape his attention.”

Forrest recalls his first-year English course with Lentz with a mixture of fondness and amusement. “[Lentz] was a very intimidating professor, particularly if you’re a freshman and totally lost,” Forrest said. “He would just call people by their last name, out of the blue, and if you weren’t prepared, he’d say, ‘Come back tomorrow when you’re prepared.’ ”

Doug Heuck ’84, who roomed with Forrest in Lewis Hall their first year at Kenyon, remembers Forrest as a talented student and violinist as well as a remarkable campus presence. “He’s always been a very capable writer and thinker,” Heuck said. “He was a musician and an athlete, successful in both regards, and an excellent student. At 6’5”, he certainly cut a memorable figure on campus.”

A center — and in his senior year, captain — on the Lords basketball team, Forrest made his mark early, and in grand fashion. He gained fame among his classmates by becoming the first person to dunk a ball in the Ernst Center, which had been built in 1981.

Heuck also remembers Forrest’s social side. “Hugh and I celebrated the end of freshman year by throwing a big party on the wing, which we called the ‘Race to Death’ party,” Heuck said.

“We purchased 13 cases of beer for it, which we hid in our room until the appointed hour. Freshmen from all over campus came, and I think we made it through all of the beer before security showed up and shut it down.”

Hints of Forrest’s future entrepreneurial gifts emerged during sophomore year. In the spring of 1982, Forrest, together with Heuck, fellow Austin native Dan Shefelman ’84, and several others, founded the Gambier Journal. Intended to be an alternative to the Collegian, the monthly Journal included pieces by both faculty and students.

Decades after leaving the Hill, Forrest still delights in connecting with his alma mater. He helped Greg Rosenbaum ’10 obtain a job with SXSWedu, the education arm of Interactive, and this year he has guided Henry Heuck ’15 — son of Doug Heuck — through an internship with Interactive.

Indeed, any Kenyonite driving in Austin may encounter Forrest, if indirectly. “I’ll occasionally see Kenyon bumper stickers on cars,” he said, “and I’ll stop and put my business card in the window.”

Forrest relishes his interaction with people who attend SXSW, both newcomers and old hats. Leaving for appointments or events presents a challenge — traveling the length of a hallway in the convention center can consume upward of 20 minutes, as he pauses to chat with familiar faces.

“I knew it was you because you’re so tall!” one woman announced as Forrest made his way to the escalator.

“Looks like people showed up to your party,” said Bob Metcalfe, co-inventor of Ethernet, upon bumping into Forrest in the registration hall.

This community of creatives inspires Forrest to return to the whirlwind of Interactive year after year, even as its chaos occasionally has him second-guessing his future. Running the event doesn’t leave him much time to pursue his hobbies — reading, especially books about North Korea, and following the ups and downs of his beloved Boston Red Sox. Not to mention what he craves the most: writing that doesn’t involve introductions, presentations, or PowerPoints.

“I’d love to write a novel, but I lack the discipline to sit down and write,” he said.

Forrest has come close to quitting several times. In 2004, he moved to Los Angeles, following a love interest. (It didn’t last.) Now married with two sons, he spent last summer powering through self-help books and consuming himself with meditation. The principles he took away from those books had a profound effect on the future of SXSW Interactive.

“That we’re all impacted by each other, that community is better than any one person, began to influence more the way I want to manage things at South by Southwest,” Forrest said. “I really want to have that ground-up approach in terms of management as opposed to top down. Goodness knows if we followed all my ideas we’d have been out of business a long time ago.”

One idea Forrest did bring to his team that stuck: the concept of tapering, a strategy borrowed from legendary Kenyon swim coach Jim Steen that Forrest absorbed from friends who were on the team. Interactive staff members attempt to draw back on their work in the weeks before the event to ensure they are well rested when the masses stampede into town.

Despite their best efforts at planning, some events take on a life of their own. In 2008, journalist Sarah Lacy interviewed Facebook founder Mark Zuckerberg at a panel event. The interview, which was later described by Wired magazine as a “train wreck,” quickly devolved into an all-out heckling by an audience unhappy with Lacy’s questions and interview style.

This year’s festival was not without a somber surprise. In February, New York Times reporter and columnist David Carr, a scheduled panelist and SXSW staple, collapsed in the New York Times newsroom and died. SXSW paid tribute to him by screening the documentary Page One, which featured the late journalist.

Constant adjustments to the schedule keep Forrest tethered to his email — with more than a thousand sessions spread out over 10 venues, changes are bound to occur. The spirit of the event may best be summed up by Forrest’s words in his welcome address to attendees: “South by Southwest is a choose-your-own-adventure.”

It’s 6:40 the evening before Interactive officially opens, and Forrest has somewhere he needs to be. He waves off a few lingering pedicabs, opting to make the short walk from the convention center to St. David’s Episcopal Church, strolling across an eerily calm Sixth Street along the way.

Despite being “free and open to the public,” his destination, the Dewey Winburne Community Service Awards, has the feel of a family reunion. The awards were created in 2000 as a way to honor the co-founder of Interactive, who died the year before, and they’ve remained a constant through the high-speed surge of Interactive’s popularity. This year, Forrest has a surprise — the announcement of a new community fund to grant money to select nonprofits.

A handful of staffers and friends glow when they see Forrest arriving. He greets them warmly as a jazz combo loosens up the crowd in the wood-paneled church hall.

“I never thought this thing would amount to a hill of beans,” he says, taking the stage and reflecting on Interactive’s history before introducing the new grant program. “The real power of South by Southwest always came from the community.”

An hour later, the official program is over, and the crowd swallows Forrest for easy conversation. He tucks away his typed-out schedule — he has no agenda left for the evening.

At the end of the day, he knows where he wants to be: here, with his community.