Student radio station WKCO-FM released a compilation album to capture the range of musicians at Kenyon this year, from singers who performed for the first time on campus to popular bands that play house parties.

One band featured on the album is SPORTS, a pop-punk group that performs at parties and as an opener to paid, outside acts at the student-run Horn Gallery. The four band members said they liked the idea of chronicling this year’s campus music because they expect their band to break up shortly after graduation when they’ll lose three seniors: Carmen Perry, who plays guitar and sings, Benji Dossetter on drums and James Karlin on bass. The group joked that guitarist Jack Washburn ’16 could buy the rights to the band and continue next year.

Aware of the transient nature of campus bands, Erin Delaney ’16, general manager of WKCO, noticed the musicians this year were particularly strong. The English major from Bronxville, New York, wanted to document their sound.

Finding songs from past campus bands to play on the radio station has been difficult, said Charlie Collison ’15 from Hanover, New Hampshire, co-general manager of the station, who also DJs and performs pop synthesizer music as Rich After Taxes.

The compilation, which includes one of Collison’s songs, was given out on CDs and is available for download on Bandcamp. The musicians celebrated the project by playing songs from the collection at an album release party in March at the Horn.

“I didn’t know there were this many people who recorded music around campus, so I think it’s great just to get more people to listen to students who play music,” said Perry, the SPORTS singer who is a religious studies major from Montclair, New Jersey.

SPORTS recorded its song "You’re So Sorry" at WKCO, and the band is working on its third album.

Interest in the campus music scene is evident from the large number of people involved in the radio station: about 110 disc jockeys and another 40 to 50 interns. They work from a recording studio, DJ booth and offices with old couches in the basement of Farr Hall. The station’s signal for channel 91.9 comes from the Peirce Hall tower, and people can listen at wkco919.org.

Along with student performances through the Department of Music, Kenyon has about a dozen student singing groups.

Some campus bands play at the Village Inn, including Trix and the Kids, a funk party band with shows that are “always very loud and very crazy,” said trumpet player Jay Leung ’15, a philosophy major from Hong Kong. “Because Kenyon is such a close-knit community, musicians all know each other and can always call each other up for an afternoon jam or recording session.”

Some musicians on the compilation:

Rioghnach Robinson ’16
Economics major from Winston Salem, North Carolina
Compilation song: "OH"
Robinson said Kenyon influenced the song, which refers to the “deep slow chimes” of the Church of the Holy Spirit in the last verse.
More music: She recorded an album in a Rosse Hall practice room that she released in October. Somebody Say Something is comprised of songs named after states. She also performs with the Owl Creek Singers, an all-female a cappella group at Kenyon.

Fever Bliss
Matt Delbridge ’16
Political science major from Springboro, Ohio
Compilation song: "Reintegration"
Delbridge describes his sound as bedroom rock. He had never performed on campus, mostly because pitching for the baseball team limits his time, he said.
More music: He has 20 songs available online, including a three-song recording Lancing the Lancelots. 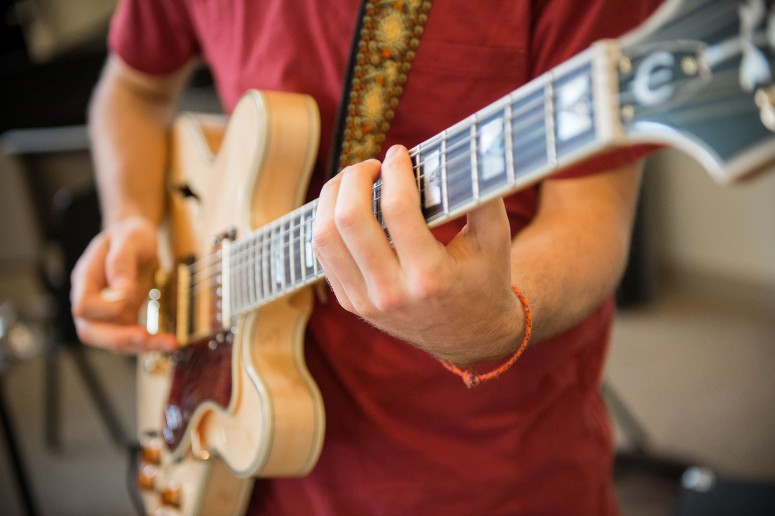