Local produce. Farm internships. Composting. Just when it seemed that there was nothing left to learn about food at Kenyon, the Kenyon Alumni Bulletin has reported some dining-hall developments we bet you never knew about before.

You may know Kenyon buys whole hogs and steers instead of packaged cuts or ground meat for its food service. It’s part of the College’s commitment to the local agricultural community. What you may not realize is that a whole steer is more than chuck and brisket and tenderloin. For whole animals to be cost-effective, ideally nothing should go to waste.

“We use it all,” said Meagan Worth-Cappell, head chef for AVI, the food service at Kenyon. Yes, she’ll turn the tender beef cuts into dishes that employ the use of locally made cheeses and breads, but she also works lesser-known animal parts into the dining menu.

Worth-Cappell said she’s served a dish she calls “pork three ways” that includes traditional barbecued pork ribs, bacon ends , and pork liver soaked in buttermilk, then seasoned with smoked paprika and seared on the flat-top grill. Some students asked for the plate without the liver, but many, she said, were willing to try it.

But the more unusual beef and pork parts remain just an occasional treat. Worth-Cappell said she has to freeze the organ meats from several “harvests”—when the College buys cows and pigs several times throughout the year—to have the quantity to serve the student population.

It’s not just mounds of meat students are eating; Worth-Cappell said they’re consuming twice the amount of vegetables as last year—a good sign for their health and nutrition. There’s heavy traffic around the salad bar, which includes the expected greens, beans, and veggies along with more unusual choices like house-pickled cauliflower, a favorite.

But the king of vegetables at Peirce is kale.

“I love kale myself,” said Worth-Cappell, who was bringing in small amounts of the sturdy green to make vegetarian dishes when she started at Kenyon in 2009. “The reaction to it was really great.”

Worth-Cappell sautés it as a side dish, tosses it in pasta and pasta salad, folds it into omelets for breakfast, and stuffs it into eggplant slices for roulade. But on occasion—as when the College purchased 800 pounds of it last October during one of its peak growing seasons in Ohio—the chef has been known to puree the vegetable into vibrant green smoothies with ginger, honey, and yogurt or tofu: a concoction that proved particularly popular among students.

According to Kim Novak, resident director for AVI, 10 to 12 percent of Kenyon’s student population require some kind of special diet, whether it be vegetarian, vegan, or—the latest high-profile health-related trend—gluten-free.

For many people, eating gluten-free isn’t a fad; it’s a necessity. The National Foundation for Celiac Awareness estimates that 1 percent of the U.S. population suffers from celiac disease, an auto-immune condition triggered by the consumption of gluten, a protein found in wheat, barley, and rye. Another 6 percent of people are believed to have a sensitivity to gluten that is less serious than full-blown celiac, but can still be debilitating.

That means roughly one in 15 people—at least one person in the typical Kenyon classroom—needs to avoid eating gluten.

Novak said AVI purchases about $3,000 worth of gluten-free cereals, pastas, breads, and sauces each month. These are served in the “allergy sensitive area” of Peirce, a stack of shelves along one wall where students can find foods that meet their special needs. AVI also identifies items outside the allergy area that are gluten-free.

The limits of local

Kenyon’s commitment to using local food is so well known, some consider it part of the College’s mission. Yet few realize that some of the most popular items at Peirce aren’t local—nor can they be, because of where they must be grown.

For example, Kenyon goes through 114 pounds of coffee each week, as well as 280 pounds of oranges. But the biggest non-local item available in the dining hall by far is bananas—to the tune of 1,200 pounds (more than 4,000 individual bananas) each week.

And while the College procures whole steers and hogs for all the beef and pork used in the dining hall, the same isn’t possible with chicken. “We buy about 3,000 local chickens a year,” said Marsh. “That’s a fraction of what we use.”

In fact, the kitchen cooks up almost 2,300 pounds of chicken each week, mostly in the form of the boneless, skinless variety, to use in everything from stir-fries to pastas. “That’s what the students were raised on,” said Novak.

Students may be aware that their dining-hall leftovers go into the “pulper,” a kind of giant garbage disposal that grinds up the food waste so that it can be composted and ultimately used as fertilizer on College grounds.

What few realize is that the composting operation actually begins during food preparation. Worth-Cappell removed the trashcans on the cooking line at Peirce and replaced them with clear plastic containers: one for recycling, the other for the pulper.

The trashcans had become a crutch, Worth-Cappell said. Instead of sorting through what they were cleaning or chopping, the prep cooks would toss useable scraps directly in the trash. The action mirrored much of what happens in home kitchens across the country: the Environmental Protection Agency estimates between 20 and 30 percent of what is thrown away could be composted.

“Now they’re consciously saying, ‘Bring it to the pulper, or this is going into stock,’” Worth-Cappell said. “It’s nice not to have that carbon footprint. We’re kind of giving back to the earth, not taking from it.” 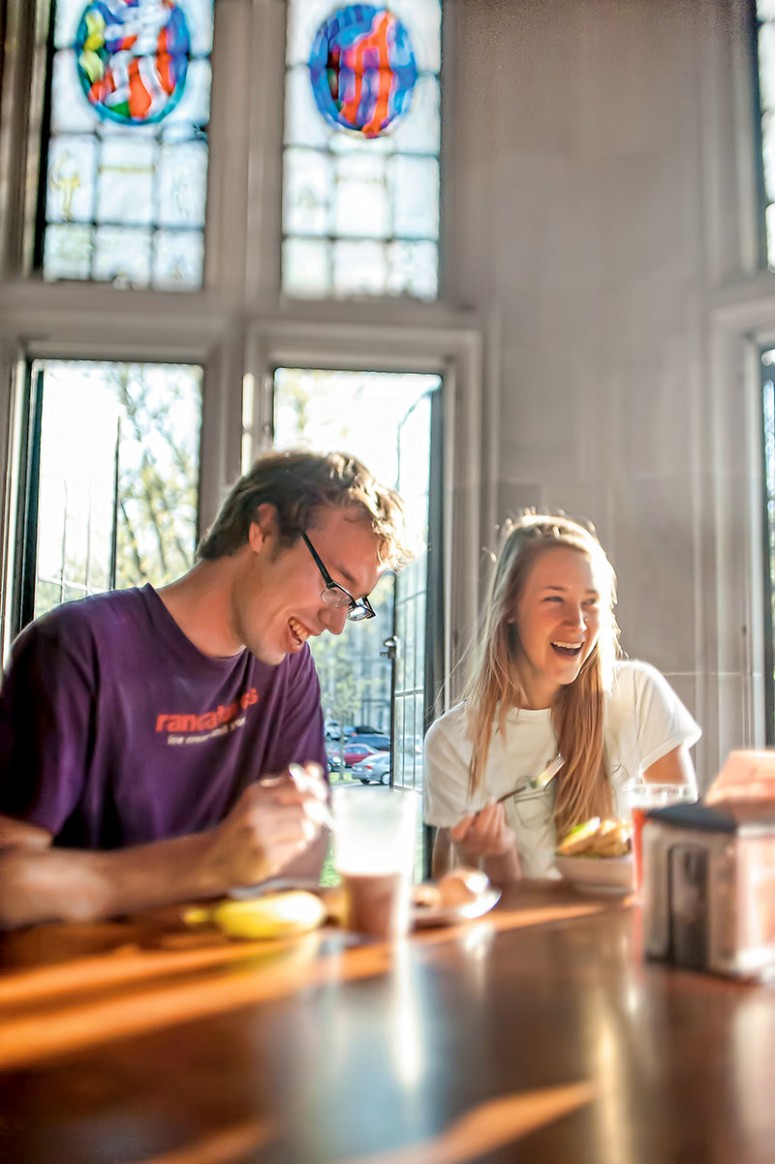