The Ohio Arts Council is kicking off a new exhibit July 27 at the Riffe Gallery in Columbus, Ohio, that will include the work of Professor of Art Gregory Spaid ’68. The exhibit, called “Flashback to Now,” features work from 16 Ohio artists who received individual grants from the council in the 1980s. Artists will show pieces from their original exhibitions alongside their current artwork.

“Separated by some 30 years, Gregory Spaid’s works in the exhibition relate to distinct and very different moments in his life,” said the exhibit’s guest curator Ann Bremner. “In both bodies of work, he brings a fascination with arrangements of actual objects together with the verisimilitude of photography in exquisitely precise compositions that suggest the narrative potential of short stories.”

Spaid, who was awarded two grants in the 1980s totaling almost $8,000, will show two pieces from his “Coloring” series. He says the series was inspired by having two young children at home and constantly having to pick up their toys. He took monochromatic photographs of blocks and other toys and used pencils to color them, creating one-of-a-kind pieces. The Museum of Modern Art in New York City acquired one of the series of nine; another is on display in the Smithsonian American Art Museum in Washington, D.C.

For his current work, Spaid is unveiling two new mixed-medium pieces that feature hand tools juxtaposed with photographs. His motivation, he said, came from spending years staring at a computer screen working on multiple digital photography series. “I decided I wanted to do something that was tactile and physical, that didn’t have to be framed,” he said. When he inherited the hand tools, he knew he wanted to turn them into art.

Spaid says revisiting his work from the 1980s was an interesting exercise. “I think I developed a new appreciation that I didn’t have before,” he said. “What’s interesting to me is how the motivation to do one series carried through in those pieces I’m doing now.”

“Flashback to Now” will be on display through Oct. 18. 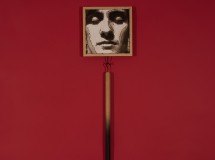 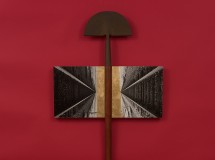