Fine and Dandy was one of the biggest hits of Broadway in the 1930-31 season, totaling more than 255 performances before it went on tour for a year. But the final show on the road was the last time the musical comedy was seen until now.

On Friday, April 18, Musical Theater and Opera Workshop students, accompanied by the Symphonic Wind Ensemble, will play restored orchestrations in a concert performance at 7:30 p.m. in Rosse Hall, thanks to the diligence of Katharine Weber, Richard L. Thomas Visiting Professor of Creative Writing.

Part musical comedy, part vaudeville and part social satire, Fine and Dandy wasn’t quite like any other show of its era. “So much of the show was like Saturday Night Live. Very witty, very of the moment,” said Weber, who revitalized the show for the Kenyon stage. But its spontaneity also made it difficult to revive, she added. Much of the show was indelibly associated with its star, Joe Cook, who vanished from show business owing to illness. Most of the madcap hilarity that made the show a success depended on Cook’s unscripted antics and improvisations. People would see the show multiple times because it would change every night.

After the show closed, most of the original orchestral arrangements were lost, so Fine and Dandy languished until 2002, when work was begun on a restoration studio recording, with Broadway performers and a 26-piece orchestra conducted by Aaron Gandy, the leading expert on the music of Kay Swift, the composer of the musical score. The Kay Swift Memorial Trust provided these musical arrangements to the Music Department. Gandy spent a week on campus in March coaching the students as they prepared for this landmark performance under the direction of Jennifer Marcellana, adjunct professor of voice. Weber served as dramaturge for the production.

The show is a personal project for Weber, whose grandmother is Swift and whose grandfather, James Paul Warburg (under the pen name Paul James), contributed the lyrics. Swift was romantically involved with George Gershwin for more than a decade, though she remained in her marriage to Warburg for the first eight years of that love affair. The score to Fine and Dandy was created both because of and despite the presence of Gershwin in their lives. “Some couples have a baby to try to save a marriage,” said Weber. “My grandparents had a Broadway show.” 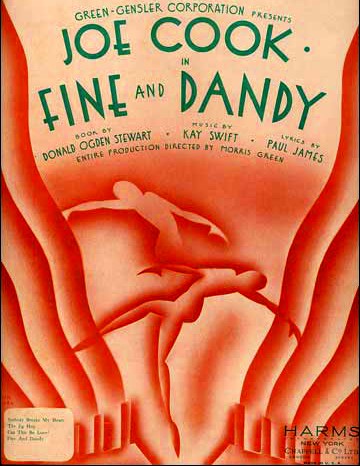