Fans of Greek gods, dancing, wine, disguise and revenge will want to see Euripides’ tragic play Bakkhai, which will be performed by the Kenyon College Dance and Dramatic Club in the Bolton Theater Thursday, Jan. 29, Friday, Jan. 30 and Saturday, Jan. 31, at 8 p.m.

First performed in 405 B.C., the story focuses on the god Dionysus’ efforts to clear his mother’s name and exact revenge upon the city of Thebes for not allowing its citizens to worship him. Death and destruction follow in the play, which is narrated by a chorus of women “possessed” by Dionysus.

Under Assistant Professor of Drama Ben Viccellio’s direction, more than 50 student participants have come together to perform the mainstage production after months of hard work. “I’m really into Greek tragedy,” Viccellio said, explaining why he chose Bakkhai. “This play has always been of great interest to me. It’s fun to look at it as sort of a coda to Greek tragedy in general, and Euripides was notorious for playing with convention.”

Despite its long history, the play remains apropos and meaningful in modern life — a fact Viccellio is careful to help his students understand and embrace. “Sometimes it seems like students are a little intimidated by Greek tragedy because it feels so foreign,” he said. “I see one of my primary jobs as to show them that these plays are just as relevant today as they were 2,500 years ago. There’s always a bit of a learning curve at the beginning, but once they get into it, then we really start cooking with gas.”

“It’s a really nice opportunity for us to get to learn from [Viccellio],” Miller said. “It’s the closest thing to an internship we can get while we’re in school.”

Elizabeth Furman ’15, a dance major from Brooklyn, N.Y., choreographed Bakkhai for her senior honors thesis. Furman’s process involved multiple readings of the play, frequent meetings with Viccellio and lots of trial and error. “I have never choreographed anything to this magnitude, so we just worked at it bit by bit,” she said. “I kind of had to work with the balance of figuring out how to do the movement justice in a way that satisfied me and the dancers while also doing the narrative justice.”

Viccellio, Miller and Baldwin all emphasized the grand scale of Bakkhai, stressing that the music and moving parts offer something for everyone. As far as the audience’s experience, Viccellio hopes theatergoers will be more than entertained. “I hope they come away with an appreciation for what the Greeks were doing with their tragedy,” he said. “I hope they can find some sort of personal connection to the material.” 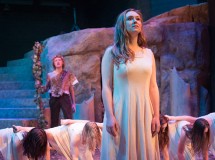 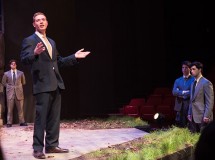