Associate Professor of English Jene Schoenfeld bookended her summer with two seminars to expand her expertise in African-American literature. She was selected to participate in a four-day slave narrative seminar at the Gilder Lehrman Institute of American History held at Yale University in June. In addition, she attended a two-week institute on contemporary black poetry at Kansas University that ended in August.

Highlights of the seminar, she said, included an introduction to the narrative about William Grimes, the first published in the U.S., as well as the opportunity to see a first edition of Incidents in the Life of a Slave Girl by Harriet Ann Jacobs. She also received enough exposure to 12 Years a Slave, the memoir and Academy Award-winning film, to feel confident in adding it to her courses.

The seminar at Kansas University stretched her professionally in other ways. “I thought this would be a chance to get more expertise not just in poetry but in African-American poetry and a better sense of more contemporary work,” she said. “It did both.”

As part of the seminar, Schoenfeld took part in discussions with poets including Sonia Sanchez and Nikky Finney and studied more than 1,500 pages.

Schoenfeld is on sabbatical from Kenyon this year, but students will still receive the benefit of her summer studies when she returns to teaching in fall of 2016. She engaged in discussions with other liberal arts professors about how to teach slave narratives and has new ideas for creative writing assignments and perhaps even a new course.

“It felt like a good place to start my sabbatical. Before I plunge into developing my own expertise as a researcher, I wanted to develop my expertise as a teacher,” she said. “That is my foundation of strength. I wanted to start there and move into this more solitary work.” 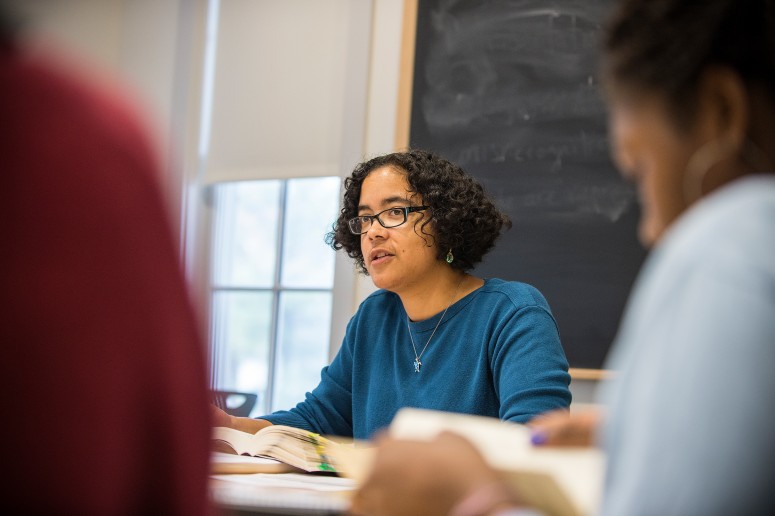