A few weeks before graduating from Kenyon, Eric Sutton ’18 found himself next to a crying stranger in Montgomery, Alabama, where they stood shoulder to shoulder before a row of tall steel columns. The two men from Indiana — one black and one white, one young and one old — had traveled to the National Memorial for Peace and Justice on a journey of remembrance.

“I saw my family’s last name on a pillar, and then he’s crying maybe three pillars down, and he had seen his family’s last name as well,” said Sutton, an international studies and sociology major from Indianapolis. “That moment was really intimate because we sat there together for a bit, and we were both from Indiana, but with pillars from very different states — mine was from Louisiana, his was from Georgia — and we were able to see each other in a very different light than we’re typically able to see each other.”

Sutton and his classmate, Megan Carr ’18, organized a trip to the grand opening of the memorial, which is dedicated to thousands of American lynching victims. To Carr and Sutton, the journey was the perfect capstone to college careers characterized by activism and involvement.

“If you study African American history, you spend a lot of time talking about the South, but to actually engage with it was an important part of the trip,” said Carr, a history and Asian studies major from Carlisle, Pennsylvania.

After advertising the trip on campus and securing funding from Kenyon for travel expenses, Carr and Sutton led 20 students on an all-night bus ride to Alabama. During the Peace and Justice Summit, the group heard from speakers like filmmaker Ava Duvernay, activist Marian Wright Edelman, feminist Gloria Steinem and former Vice President Al Gore; saw the bus stop where Rosa Parks stood up for her rights by sitting down; and swayed to performances by R&B stars Patti LaBelle and Stevie Wonder.

“We were absolutely in the presence of living legends,” Carr said. “People who have so much hope and wisdom, and who say ‘we know it used to be a lot worse.’ And I think we need that optimism, but also they need us, who know it should still be a lot better.”

The highlight of their trip was visiting the memorial and Legacy Museum, which was established by the Equal Justice Initiative (EJI) to tell the story of racial injustice and violence in America. According to figures from EJI, between 1877 and 1950, more than 4,000 African Americans were murdered by white supremacist vigilantes and mobs in 20 states. At the memorial, located on the site of a former slave barracks, six-foot tall steel monuments are engraved with the names of victims from 800 counties across America — with many listed simply as “unknown.”

“This museum wasn’t just for black people who wanted to see how victims of lynching were going to be commemorated,” Sutton said. “This history is part of all of our journeys and we’re all sort of implicated in this.”

Carr and Sutton were inspired to explore this part of American history after taking a class with Assistant Professor of American Studies and History Francis Gourrier ’08 called “Blacks in the Age of Jim Crow.” Two years prior, Gourrier led a journey to the site of an infamous 1916 lynching in Abbeville, South Carolina. Carr and Sutton chose Montgomery as the destination for their trip after reading “Just Mercy” by EJI founder and social justice activist Bryan Stevenson, who spoke at Kenyon in 2016.

“If you want to create something on this campus, you can,” said Sutton, a track-and-field athlete who was president of the Black Student Union and a member of Kenyon’s Gospel Choir. “One of the reasons that Kenyon has become so necessary to me is it’s a place where I’ve created a lot and I feel like my friends have created a lot — the people I’ve surrounded myself with have created a lot of spaces for other people to exist in a way that they feel comfortable existing.”

Carr and Sutton both enlisted with Teach for America after graduating from Kenyon. Sutton is teaching in his hometown of Indianapolis before potentially heading to law school, and Carr is in Buffalo, New York, teaching English as a second language to the city’s large refugee community.

“I have spent years trying to figure out how to have the greatest impact that doesn’t involve compromising my morals,” Carr said. “Then I realized it was consistently my teachers and professors who gave me their very honest view of the world and had the greatest impact.” 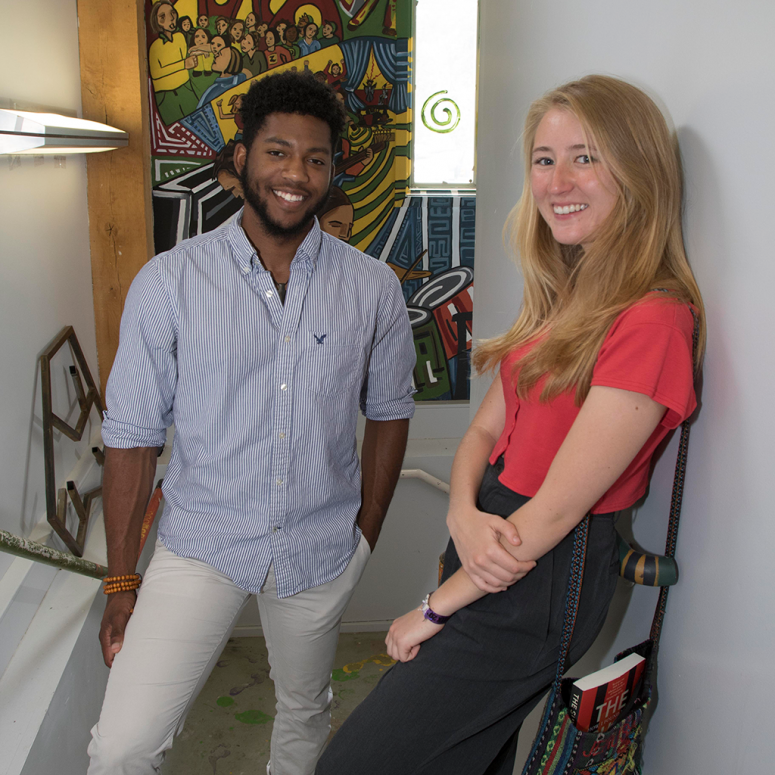 Meera White ’18 participated in the trip to Montgomery that Sutton and Carr organized.