During his research in Cameroon last fall, Max Smith ’18 met people using cellphones in innovative ways to improve their lives. A security guard made money charging cellphones at the remote cell tower he patrols. Farmers used cellphones to check crop prices to ensure they got a fair deal from buyers.

Smith is one of dozens of students who will present their research and experiences Tuesday, April 4 during a midday celebration of intellectual and creative life on campus. This second annual showcase will take place from 11 a.m. to 1 p.m. in the Kenyon Athletic Center. All members of the community are invited, and lunch will be served at the KAC.

“The primary goal of this campuswide event is to celebrate student success on the Hill, to share information with one another about the amazing things our students and classes are doing, and to foster intellectual discussion and creative engagement on campus,” said Professor of Mathematics and Statistics Brad Hartlaub, who is organizing the event.

More than 50 presentations will show how students pursue high-impact experiences such as research projects, artistic performances, internships, community-based activities, off-campus studies or collaborative assignments. The presentations will range from a study of gender in Knox County’s cemeteries to a computer simulation that predicted the number of runs scored in games from the 2016 Major League Baseball season.

Maya Street-Sachs ’17 of Brooklyn, New York, will talk about her summer doing logistical planning for a proposal to create an education-in-prison program. Tracy Chmiel ’17 of East Amherst, New York, will discuss a way to better calibrate instruments in the Laser Interferometer Gravitational-Wave Observatory (LIGO) collaboration. And Adam Brill ’17 of Washington, D.C., will present a paper about bodily response to Jean-Paul Sartre’s theory of emotions.

“When they asked me to present, at first I wasn’t sure because thought my research didn’t have that big an impact on others. But then I understood the purpose of the event. And it’s true — my research had a big impact on me,” said Smith, an international studies and French double major from Chapel Hill, North Carolina.

Smith’s field research on mobile phones was conducted during his semester last fall in Cameroon. He became fascinated by the rapid growth of cellphone use in Cameroon — the number of service subscribers more than tripled between 2007 and 2015. Smith’s term for his subject is “glocalization,” in which Cameroonians adapt global technology to local needs. Cameroon transitioned suddenly from a nation where landlines were available only to the elite to a mobile phone economy open to every Cameroonian. Now a secondhand cellphone can cost less than a jar of jam there.

“The streets there are literally buzzing with sounds of cellphones and the advertisements of vendors selling phones,” added Smith, who plans to return to Africa this summer to continue his research. 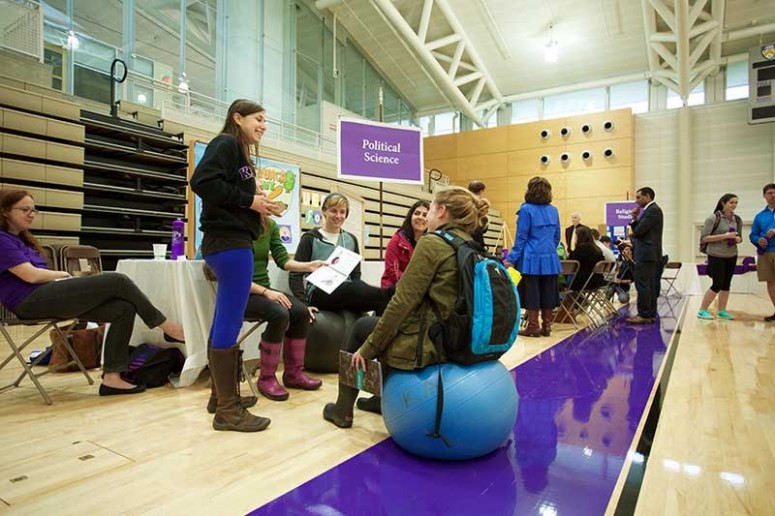