While the battle for Europe and Asia in World War II raged in steel and mud, a different battle of paper and ink was being fought in America. This battle is illustrated in a special exhibit, “This is the Enemy: Describing Nazi Aggression in Text and Image,” which is on display in the Greenslade Special Collections and Archives in Olin and Chalmers Libraries until March 25.

Austin Porter, a visiting assistant professor in the history, art history and American studies departments, organized the exhibit to introduce viewers to the Allied propaganda effort against Nazi Germany before and during World War II.

“Before the Japanese attack in December 1941, some Americans saw Hitler as Europe's problem and argued for a continued isolationist stance while others pushed for intervention in Europe,” said Porter, who also is a postdoctoral fellow at the Center for the Study of American Democracy. “While American support for the war was very strong and widespread after Pearl Harbor, in as early as the second year of American involvement, public opinion polls suggested some cracks.”

Those cracks are indicated in the exhibit’s eponymous piece, an original poster of a Bible being stabbed by a sinister knife and a swastika emblazoned on the guilty hand’s sleeve. The poster reads, “This is the Enemy.” Another foreboding poster shows a hooded and chained figure ready for execution against a brick wall. Around the victim’s waist, a banner details the massacre at Lidice, Czechoslovakia, as reported by a proud Radio Berlin.

“But that type of aggressive, violent and unsettling imagery began to wear on viewers,” Porter said. “The government began to receive reports from shopkeepers and factory managers who refused to display posters because they were too violent.”

By mid-1943, most posters in the U.S. shied away from specific incidents of brutality and instead emulated symbolic themes in the style of artists like Norman Rockwell, depicting American children threatened by a swastika shadow.

The exhibit also includes British propaganda, including a large collection of pamphlets whose publishers range from the Oxford University Press to the Communist Party of Great Britain. “One of this exhibition’s themes is how text and image contrast or compete to achieve similar goals,” Porter said. “What you end up with is a variety of approaches responding to the same problem of explaining the seriousness of Nazi violence.”

“This is the Enemy” is unique to the Greenslade Special Collections and draws on the College’s collections and portions of long-term loans from a private Kenyon alumnus. The archives are open Monday through Friday from 9 a.m.-12 p.m. and 1-4 p.m. For questions, contact archives@kenyon.edu. 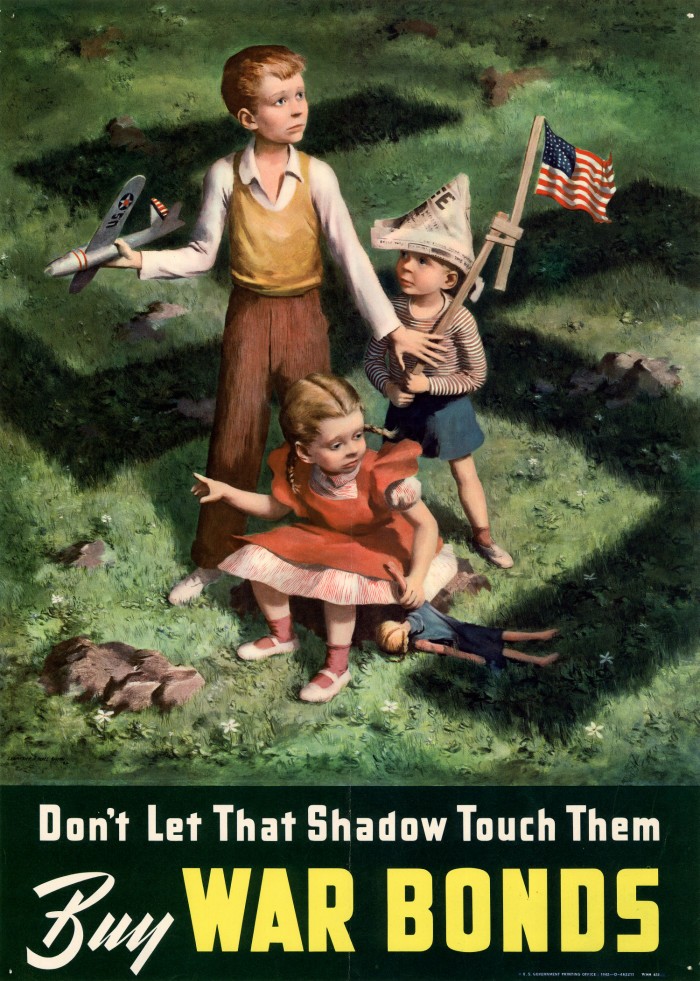