Photo: Jules Desroches '18 asks a question during a panel discussion.

On Monday, Jan. 18, Kenyon highlighted the legacy of Martin Luther King Jr. with its annual Days of Dialogue celebration. A schedule of events in the afternoon focused on the theme of “Give Us the Ballot.”

“The central efforts in the early civil rights movement were about voting, such as removal of the poll tax,” said Yutan Getzler, associate professor of chemistry, who led this year’s programming. With recent Supreme Court decisions about the Voting Rights Act, as well as an upcoming presidential election, the topic seemed particularly relevant.

The keynote address, called “Bringing Dignity to Voting,” was given by Ellen Katz, professor of law at the University of Michigan. Katz writes and teaches about election law and has published numerous articles, including an influential empirical study of litigation under the Voting Rights Act.

“The idea of dignity plays an increasingly central role in debates about a number of contemporary legal issues,” Katz said, citing marriage equality, abortion rights and capital punishment as prominent examples. “Dignity, however, plays, at most, a peripheral role in contemporary voting rights law.

“This absence is particularly odd given that activists seeking to expand the electorate along various dimensions have long invoked the dignitary aspects of voting to bolster their claims,” she said.

Katz discussed what might change in contemporary voting rights law if dignity constituted a central component of the right to vote.

Getzler said anyone who believes in democracy must look at the state of voting in a significant way, especially beyond one’s own experience. “Because Kenyon is a white majority campus, it is important to appreciate that our own experience of something isn’t necessarily everyone’s experience,” he said.

Other events for Days of Dialogue included remarks by President Sean Decatur and performances by the Chamber Singers, Gospel Choir and Handsome Devils, a faculty band, in addition to a day of service scheduled for Saturday, Jan. 23.

Full schedule of events (all in Rosse Hall except where noted): Students listen to a keynote speech on dignity and voting. An audience member asks a question during a panel discussion. 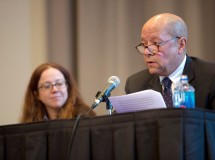 Prof. Ted Mason responds to a question during a panel discussion. Members of the Handsome Devils, a faculty band, perform. Members of the Gospel Choir and the Handsome Devils perform together. 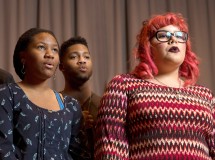