Kenyon’s annual Founders’ Day ceremony is an opportunity to “invoke the memory of the famous and the humble who have made a College in this place,” in the words of Professor of Drama Jonathan Tazewell ’84 P’15, who delivered this year’s Founders’ Memorial opening remarks. In addition to remembering those in the College community who died in the previous year and honoring several faculty and community members with awards, the ceremony — held in Rosse Hall on the morning of Oct. 26 — marked the final step in Kenyon’s official welcome of the Class of 2021.

Professor of Physics Paula Turner P’10 extended this welcome during her unusually interactive address titled “Two Truths and a Lie.” Encouraging audience participation, she asked members of the new class to turn to each other and play a variation on the common icebreaker, in which each would reveal two of their strengths and one of their anxieties. By listening carefully to each other, Turner said, the Class of 2021 was taking an important step in becoming fully accepted as members of the community. “Belonging is a process, not an event,” she continued. “People learn best when they’re engaged in questioning and discussing.”

Vice President for Student Affairs Meredith Harper Bonham ’92 led new students in the Matriculation Oath, during which matriculants pledge to “render [Kenyon], as our Alma Mater, due honor and respect.” Following the Rite of Matriculation and the presentation of newly elected members of the Board of Trustees, several categories of awards were presented.

Provost Joseph L. Klesner presented the Faculty Advising Award to Associate Professor of English Sarah Heidt ’97, recognized as a faculty member who “brings a level of genuine caring to her role as an advisor, regardless of whether the matter at hand is personal or professional.” Klesner then introduced 13 newly elected members of the Beta of Ohio chapter of Phi Beta Kappa, all members of the Class of 2018.

Following the ceremony, members of First-Year Council presented the College with a newly planted sugar maple tree located along Middle Path between Samuel Mather and Ascension halls. Through a Facebook poll, the Class of 2021 elected to name the sapling “Sean Treecatur,” in honor of President Decatur, according to Class President Lucas Roos ’21.

In keeping with a tradition started with the Class of 1841, newly matriculated students were invited to sign the Matriculation Book, housed in Olin Library’s Greenslade Special Collections and Archives. The book, now in its third volume, contains approximately 24,000 signatures, including alumni such as former U.S. President Rutherford B. Hayes, Class of 1842, actress Allison Janney ’82 H’00 and best-selling author John Green ’00 H’16. 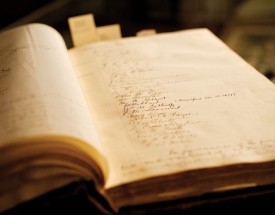 In the age of electronic documents and cloud storage, one thing remains tangible at Kenyon: the Matriculation Book.

Read more about the Matriculation Book. Read the Founders' Day address, given by Professor of Physics Paula Turner P'10.