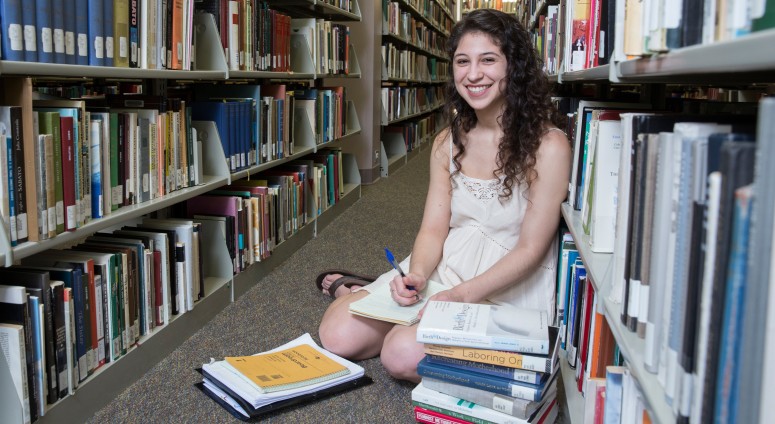 Last fall, Aubrianna Osorio ’17 took an interdisciplinary course titled “Biology of Female Sexuality.” During the class, Osorio learned about the history, sociology, science and politics of midwifery in the U.S. and beyond. The course’s films, discussions and related readings on midwifery lit a spark in Osorio, a sociology major from Long Beach, California.

“We watched a lot of birth documentaries, and they were so interesting,” she said. Through them, she discovered that Americans’ views on childbirth have shifted dramatically over time. “Early in American history we used midwives a lot, but nowadays, when we think of birth, we think of hospitals and different drug interventions and surgical interventions. And it doesn’t have to be that way.”

Through Kenyon’s  John W. Adams Summer Scholars Program in Socio-Legal Studies, Osorio is delving much deeper into the topic through a research project titled “Midwifery, the Affordable Care Act, and the Epistemic Authority of Women.” The project, supervised by Associate Professor of Political Science Abbie Erler, examines midwifery’s place in the U.S. health care system and recent changes caused by the implementation of the Patient Protection and Affordable Care Act, more commonly known as Obamacare.

Osorio is spending this summer on campus researching differing philosophies of maternal care in the U.S., health care reform, the expansion of Medicaid, the Affordable Care Act, and feminist theories of science and reproductive rights. She also is interviewing midwives and women who have given birth under the care of midwives.

“For this project, one of the most important things is going to be assessing all of the potential benefits that midwifery could have for our health care system and making a strong case that it should be more meaningfully included and taken seriously,” she said. “Before the Affordable Care Act, pregnancy was listed as a pre-existing condition and it wasn’t an essential health benefit. Now it is, which is really great for maternity coverage.”

Throughout much of Europe, Osorio noted, women use midwifery as the main model of maternity. That is far from the case in the U.S., however, where hospital births (and often medical interventions) are the norm, childbirth costs are higher and maternal mortality rates are rising.

"From what I can tell [so far], it seems like the big Medicaid expansion under the Affordable Care Act is the number one thing that is going to help increase access to midwifery,” she explained. “When [midwifery is] not covered by insurance, it's hard to get access to it, and so a lot of lower-income women haven’t had access to these services. ... Hopefully now they [have] more access."

Osorio is one of five dozen students who received a $3,500 stipend this summer for research projects, often working one-on-one with faculty members.

“The Legal Scholars program is delighted to be able to fund projects like Aubrianna’s,” said Ric S. Sheffield, professor of legal studies and sociology and director of the Summer Legal Scholars program. “Her research, like the others’, illustrates how law plays a central role in the construction and articulation of social values as well as serving as a vehicle for cultural change.”

The program, he added, “enables students to ‘experience the law’ through multiple lenses in the types of academic environments that make for deep learning.”

In addition to socio-legal issues, students are studying science, music, culture, literature and a variety of other topics through several programs: Summer Scholars for humanities and social sciences, the Democracy Scholars Program through Kenyon’s Center for the Study of American Democracy, and the Kenyon Summer Science Scholars Program.

"It's nice to stay on campus for the summer because it is beautiful here,” Osorio said. “It's hard to get this kind of experience, and for me, this is a huge opportunity to make sure that this is the path that I want to continue on. ... I'm hoping to come out with a sense that this is really what I want to do [after college].”