Where do we go from here? That was the question weighing on the minds of 11 students as they departed the U.S.-Mexico border after spending a week exploring the borderlands, immersed in the immigration issues that affect the region.

The trip was part of “Borders and Border Crossings,” a course with a travel seminar taught by Associate Professor of Sociology Jennifer Johnson that examines the technological, economic, political and ideological forces that lead people to cross national borders as well as the motives for fortifying those borders.

Seven weeks into the course, Johnson and her students traveled to BorderLinks, an educational organization in Tucson, Arizona, to engage with the issues that they have been studying around the seminar table.

“I knew that this course would give me the opportunity to take the big ideas we discuss in class regarding borders and see them firsthand when we visited the U.S.-Mexico border,” Evie Kennedy ’17 of Nashville, Tennessee, said. A psychology and Spanish double major, Kennedy’s grasp of the Spanish language proved invaluable when translating the stories of the people they met at the border.

During their week-long trip, Kennedy and her classmates walked a migrant trail in the Sonoran Desert, witnessed a courtroom hearing for apprehended immigrants, visited the steel-beam wall dividing the U.S. and Mexico, talked to Border Patrol agents and met with detainees seeking asylum from their home countries.

“This trip opened our minds to a new kind of applied learning that we have never experienced before,” Willa Moore ’19, a sociology major from Brooklyn, New York, wrote in a blog that the students kept throughout the week. They took turns writing about their daily experiences, describing what they heard, saw and felt at each location and articulating the questions they were left with at day’s end, including: “How can we use our experience with this travel seminar to make a difference?”

Read more about the students’ experiences on their blog.

Photos from "Borders and Border Crossings" Students arrive at BorderLinks in Tuscon for orientation. 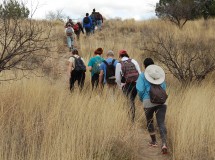 Students walk the migrant trail in the Sonoran Desert. Evie Kennedy '17 illustrates what she sees in the courtroom as part of Operation Streamline. Students take in the U.S.-Mexico border wall at Nogales. A shrine for José Antonio Elena Rodríguez, a young victim of border violence. 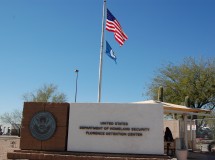 Students visit the Florence Detention Center and meet with detainees who have been apprehended for crossing.