Middle East scholar Phyllis Bennis, a fellow with an anti-war think tank, called for creativity among diplomats and an end to America’s military action in the region in a speech to a crowd of mostly students.

Bennis, a critic of U.S. Middle East policies who works for the Institute for Policy Studies in Washington, D.C., stressed in her talk Tuesday, Oct. 20, in Higley Hall auditorium that America should remove troops from the region to begin repairing political relationships in that part of the world. The Middle East Students Association invited her to speak.

A frequent political commentator, Bennis also advocated for the U.S. to increase the percentage of Syrian refugees it accepts to align with the country’s share of global wealth.

She reflected on former President George W. Bush’s response to the Sept. 11 attacks, saying he created the notion that America had only two choices. “We were told by President Bush on that day 24 hours after the attack, we either go to war or we let them get away with it,” Bennis said. “It was black and white. It was one or the other. … That wasn’t true then, and it’s not true now.”

Her talk had the same title as her 2015 book: Understanding ISIS and the New Global War on Terror. She said the solution to America’s war against the Islamic militant group should be diplomacy, not drone warfare.

Bennis, who has studied the Middle East for 30 years, is director of the institute’s New Internationalism project to try to change what the group says are failed U.S. policies in Iraq and Afghanistan and on Israeli occupation of Palestinian territories. She has written and edited 11 books, including Understanding the Palestinian-Israeli Conflict.

Qossay Alsattari ’16, a double major in international studies and economics, asked Bennis to visit Kenyon on behalf of the student organization after he interned for her this summer doing policy analysis and advocacy work.

“I was constantly amazed by Phyllis' knowledge about the American foreign policy, United Nations and Middle East politics,” he said. “Also, I was very inspired by her commitment to anti-war movements and challenging mainstream analysis of issues facing the Middle East.”

In her speech, Bennis cited former Sen. George Mitchell’s work in Northern Ireland as a good model for helping America rebuild relations with Middle Eastern countries. “He said if you’re serious about diplomacy, the first thing you have to guarantee is that everyone is at the table,” she said. “You can’t exclude somebody because you think they’re a terrorist. … If they’re not at the table, you’re giving them permission to ignore everything that’s decided at the table.”

Sruthi Rao ’16, a double major in international studies and economics, said she found the talk informative. “I think it was valuable because she did focus on some major points that I think everyone needs to understand are true,” she said.

Bennis said her solution will prevail ultimately. “Everybody knows that eventually there will be negotiations,” she said. “The question is, how many more people have to die before we get there?” 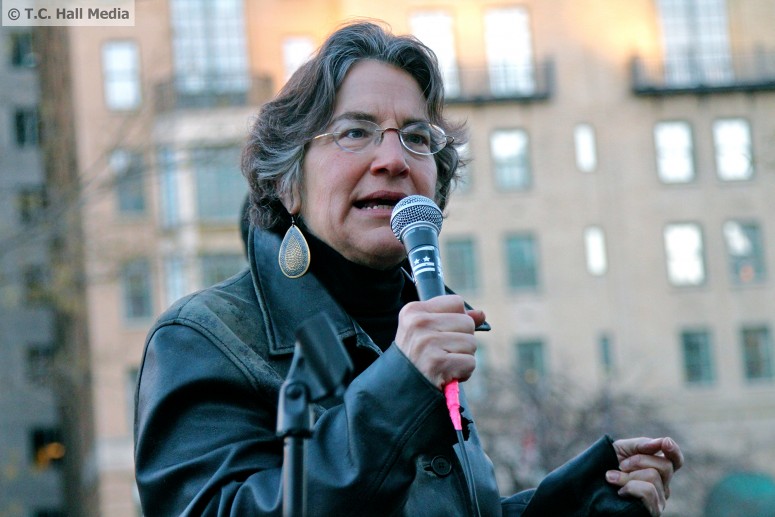