Students who enrolled last spring in Women’s and Gender Studies 331 probably never expected to bounce on an exercise ball, meet with local community health groups or interview a fourth-grader for class. But that’s what happened after Associate Professor of Political Science Abbie Erler, who teaches "Gender, Power and Knowledge: Research Practices," decided to undertake an analysis of Knox County’s “Crunch Out Obesity” program.

In past iterations of the biennial course, students completed a research project on campus, but Erler decided it was time to get off the Hill. “I thought maybe we could try something that could have a broader impact,” she said. “The [Knox County] Health Department was looking for someone to evaluate its health and fitness program for schoolkids, so that seemed like it would fit in.”

Crunch Out Obesity is a program used in local schools to encourage elementary students to make positive lifestyle choices, including exercise and healthy eating. During the fall semester, fourth-graders receive a rubber exercise ball, along with a booklet of exercises and information on proper nutrition. After completing journals of their experiences, students were invited to participate in an essay contest and show off what they learned at a community celebration.

“All of our programs must be evidence-based,” said Tami Ruhl, project coordinator at the Knox County Health Department. “So that’s what working with Professor Erler has helped us do.” By interviewing fourth- and fifth-graders during the spring semester, Erler’s students were able to assess how much information had been retained either one or three semesters after the program concluded.

“We found that the kids had pretty good retention, that they enjoyed using the balls and that lots of them continued doing the exercises even into fifth grade,” Erler said. Students also remembered the phrase “five, two, one and none,” encouraging them each day to eat five servings of fruit and vegetables, limit screen time to two hours, engage in one hour of physical activity and cut out sugary beverages.

Erler’s class connected the research to women’s and gender studies by focusing on issues of body image, and suggested that the program not present obesity as a moral failing. “We thought it would be more helpful for the program to refocus its angle more on conceptions of being healthy,” said Julia Waldow ’17, an English major with a women’s and gender studies concentration.

“A lot of the articles that you typically read in a gender theory class can be a lot more theoretical, and so being able to apply that practical knowledge and have that experiential learning aspect is really valuable, because I think it helps us to better internalize those concepts and see them in the real world,” Waldow said. “Getting involved in your community and learning how your actions can directly impact others is really important.”

The 14 students in Erler’s course ended up interviewing a total of 267 Knox County children. “I loved it,” said Ali Pratt ’17, a history major with a women’s and gender studies concentration. “They’re super cute, and they were very eager to help. I think they were very concerned about giving the ‘right’ answer, even though we stressed at the very beginning of every single one of our interviews that there was no right answer; we just wanted to know what they thought about the program.”

Erler’s course was featured at a March event on campus celebrating high-impact learning experiences at Kenyon, and Director of Community Partnerships Jen Odenweller helped coordinate a presentation about the project at a Great Lakes Colleges Association conference this fall.

In the future, “definitely, we’re going to do the same project,” Erler said. Revisiting the same research when the class is offered again in Spring 2018 will provide longitudinal data about how implemented alterations have affected the program’s efficacy. Community partners were positive about the experience of working with Kenyon students, and said they look forward to the continued collaboration.

“It was very eye-opening that there were so many dedicated students in the classroom that really gave it their all,” said Lisa Rutter, education program coordinator of the United Way of Knox County. “I’m very excited about what this is going to lead into with other programs.”

“We’re excited for the next round of partnership,” said Nick Clark, executive director of the YMCA of Mount Vernon. “We can’t wait to dream up some things to have these college students work on.” 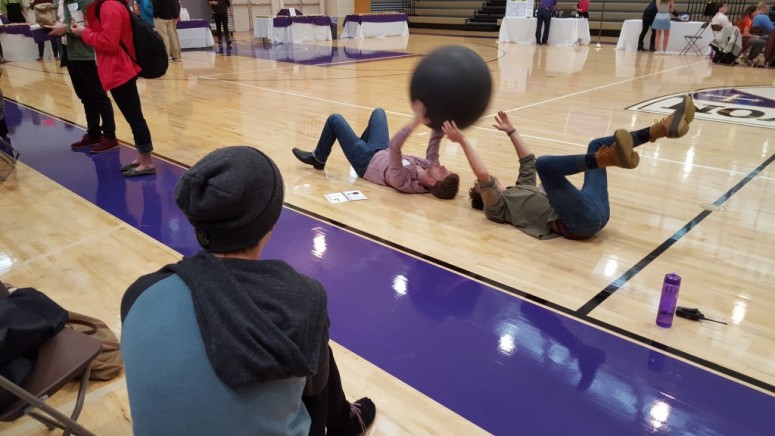