For 10 hours on April 8, students and community members united to fight against cancer at Relay for Life, an annual fundraising event for the American Cancer Society (ACS). This year’s theme of “Camp Relay!” lent a summertime vibe to the event, held at the Kenyon Athletic Center (KAC). Participants walked the track in laps modeled after childhood summer camp experiences, such as a sing-along lap, a leap-frog lap and a limbo lap.

Bailey Dominguez ’17 from Indianapolis and Zoe Bergman ’19 from Ligonier, Pennsylvania, co-chaired this year’s event. Both students have been personally affected by cancer and wanted to show their support for survivors and fighters by becoming involved with Relay.

Dominguez said the event helps build a sense of community among survivors and their families. “You can visually see how many of us have been affected by cancer,” she said. “By the end of the ceremony, you see it’s so universal, and it’s something we all can connect on and work together to help out.”

This year, around 250 individuals participated in Relay for Life, and the Kenyon community raised around $17,000 for the American Cancer Society. The top fundraising teams usually use a combination of methods to raise money, from social media to personal contact with donors to interactive on-site fundraisers, Dominguez said.

The Luminaria ceremony, a closing ceremony that honors those affected by cancer, was a popular part of the event. Participants lit small paper lanterns and walked a special lap in support of cancer survivors and in remembrance of people who have died of cancer.

“It’s a great way to get everyone involved in a special event that honors those who passed away and those who are still fighting and those who survived and beat cancer,” said Bergman, who cited the Luminaria ceremony as her favorite part of the day. “That’s why we relay. We relay for more birthdays, and I think that [ceremony] is a great way of celebrating that.”

Staff Council sponsored a sit-down dinner in memory of Scott Layson, the former director of the Career Development Office, who died in September. Layson’s wife, Cathy, gave a speech to participants at the event’s “fight back ceremony,” and afterward, participants released 48 dove-shaped balloons outside the KAC in honor of Layson’s 48 years of life.

Maureen Tobin P’20, senior associate director for graduate school and career advising, said, “Watching the balloons fade into the blue sky was a fitting way to say goodbye to a kind, funny, smart man.” The balloons were biodegradable so they would not cause harm to the environment when they landed.

“Each balloon had a [plant] seed that hopefully can create a new life somewhere in the area,” Dominguez said. “We hope this becomes an annual event, as it was incredibly successful and created a strong connection between Kenyon’s staff and Relay for Life.” 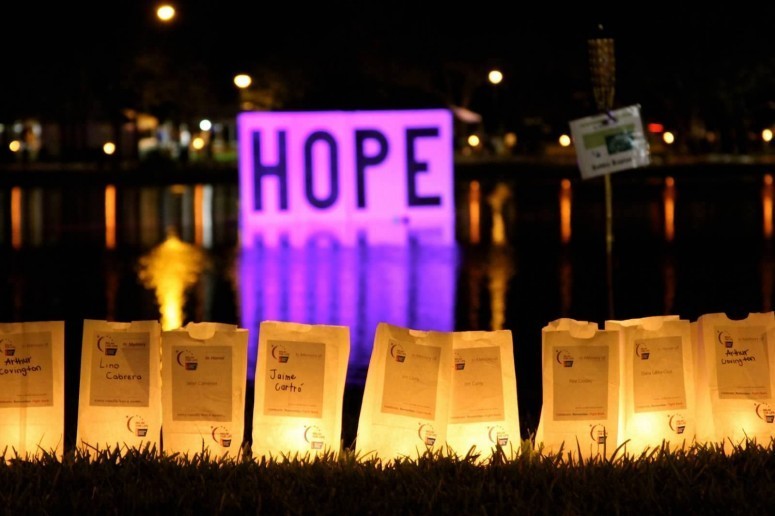