Editor's Note: Baccalaureate and Commencement will be livestreamed.

The College’s one hundred eighty-­sixth Commencement ceremony, on Saturday, May 17, will feature an acclaimed writer, three retiring faculty members with nearly one hundred years of combined service, an administrator with thirty years of her own, a coach whose successes are legendary and the four hundred young men and women of the Class of 2014 who will parade down Middle Path one last time before taking themselves and their diplomas out into the world.

Depending on the weather, the graduation ceremony will be held either on the lawn between two of the College’s oldest academic buildings, Ascension Hall and Samuel Mather Science Hall, or in the Kenyon Athletic Center, a more recent addition to the campus. The Baccalaureate service will take place on Friday, May 16, at 1:30 p.m.

This year’s Baccalaureate speaker, chosen by the seniors, is Associate Professor of Economics Jay R. Corrigan. A member of the faculty since 2002, he specializes in agricultural, environmental, experimental, and resource economics, as well as public­ sector economics. His research focuses primarily on estimating the value consumers place on new product traits. A graduate of Grinnell College with a Ph.D. from Iowa State University, he also serves on the faculties of the College’s programs in environmental studies and public policy.

Following the Baccalaureate service, the graduating class will gather to partake in a cherished Kenyon tradition, the Senior Sing, which—if the weather cooperates—will proceed on the steps of Rosse Hall. Commencement Weekend also features all­ campus seminars on Friday by Professor of Music Dane O. Heuchemer, whose topic is "Musica Cartoonum," and Professor of Physics Paula C. Turner, whose session is entitled "Galaxies that Go Bump in the Night."

On Saturday, the address to the graduating class will be offered by Bill Bryson, the noted writer. A native of Iowa who studied for two years at Drake University, he withdrew to backpack through Europe. He soon returned to Europe, landing in England in 1973 and deciding to stay for a while. With the exception of a couple of years in the mid 1970s and several later years spent in Hanover, New Hampshire, he has lived in England ever since.

Bryson worked as a journalist during most of his first decade in England. Starting as a copy editor, he rose to the position of deputy national news editor at the Independent. He left journalism in the late 1980s, shortly after publishing his first two books.

Bryson is the author of almost two dozen books—so far. These include volumes on history (among them At Home: A Short History of Private Life), language (e.g., The Mother Tongue: English and How It Got That Way), science (A Short History of Nearly Everything, for instance), and travel (A Walk in the Woods: Rediscovering America on the Appalachian Trail, perhaps his best known in the United States). He is also the author of a biography, Shakespeare: The World as Stage, and a memoir, The Life and Times of the Thunderbolt Kid. Bryson’s most recently published book is One Summer: America, 1927, which makes a compelling case for both the singularity and the pervasive influence on our culture of that four­ month period. The Boston Guardian’s Christopher Bray called it "surely the most sublime distraction published this year" and noted that "few writers of nonfiction, and, let’s be honest, few enough writers of novels, can crack the narrative whip like Bryson." The New York Times, in a review by Kevin Baker, stated that the author "writes in a style as effervescent as the time itself" but allows that "Bryson is best at deflating our nostalgia for the era, even as he upholds its importance."

In 2005, Bryson was named chancellor of Durham University, a post he held for six years and which led to the renaming of the institution’s library for him. He was awarded the Order of the British Empire a year later for his contributions to literature. Among the many other forms of recognition that have come his way are the President’s Award of the Royal Society of Chemistry, the James Joyce Award of the Literary and Historical Society of University College Dublin, an honorary doctorate from King’s College London, and the key to the city of Des Moines.

Bryson and his wife, Cynthia, are the parents of four children, David, Felicity, Catherine, and Samuel.

The three retiring faculty members being honored at Commencement are Joseph A. Adler, a professor of Asian studies and religious studies, E. Raymond Heithaus, a professor of biology, and Patricia Smith Heithaus, an instructor of biology. Together, they have contributed nearly one hundred years of subject area expertise and top­ notch teaching, counseling, and administrative skills to the community.

Founder of the Confucian Traditions Group of the American Academy of Religion, Adler focuses his research on Neo­Confucian religious thought in China. He is the author, most recently, of Reconstructing the Confucian Dao: Zhu Xi’s Appropriation of Zhou Dunyi; translator of Introduction to the Study of the Classic of Change, by Zhu Xi; coauthor of Sung Dynasty Uses of the I Ching; and a contributor to numerous edited volumes, journals, and encyclopedias. Chairman of the Department of Religious Studies from 1997 to 2000 and director of the Asian Studies Program from 2004 to 2007 and 2010 to 2013, he is a former resident director of the Japan Study Program of the Associated Colleges of the Midwest and the Great Lakes Colleges Association at Waseda University in Tokyo.

Adler and his wife, Ruth Woehr, are the parents of a daughter,Anna Woehr Adler, a 2006 alumna of Kenyon who serves as executive director of the Colorado Criminal Defense Bar in Denver.

Ray Heithaus, a member of the biology faculty from 1980 until his recent retirement, is a founder and former executive director of the College’s Brown Family Environmental Center. He was also a member of the faculties of Kenyon’s Biochemistry and Molecular Biology Program and its Environmental Studies Program (of which he was a cofounder).

Long active in community affairs, Ray Heithaus serves as a member of the Kokosing Scenic River Association and its Advisory Council. He has also been active as a trustee of the Ohio Academy of Science, as the College’s representative to the Ohio Biological Survey, and as a member and officer of the Owl Creek Conservancy. While he now holds the title of professor emeritus at Kenyon, he continues to work as a naturalist at the Brown Family Environmental Center.

From 1983 to 1996, Ray Heithaus served as editor ­in­ chief of Biotropica, a peer ­reviewed journal publishing original research on the ecology, conservation, and management of tropical ecosystems and on the evolution, behavior, and population biology of tropical organisms. His own publications have been based on his research into such areas as seed dispersal by ants and population structures of fish in head­water streams.

Pat Heithaus, who first taught at the College in 1984 as an adjunct instructor, went on to become an instructor in biology with responsibility her department’s year­-long introductory laboratory course. She was also involved for many years in the production of Biotropica, the journal edited by her husband.

Throughout her time at Kenyon, Pat Heithaus has been a committed mentor to students in the introductory laboratory course, a required class for majors. Her goal in the course, which focuses on the processes of investigative biology as well as the principles of scientific writing, has been to assist students in developing the analytical tools and critical­ thinking skills essential to the discipline as a laboratory science.

Pat Heithaus has also been involved with the Brown Family Environmental Center since its founding. She has been especially active as a creator and custodian of the center’s butterfly garden, which annually attracts not only enormous numbers of lepidopterans but also scores of artists, butterfly and flower enthusiasts, and casual visitors.

Pat Heithaus earned both her bachelor’s degree and an M.S. in zoology at the University of Iowa.

Blanchard’s long-­time colleague, Vice President for Finance Joseph G. Nelson, gives his associate a large share of the credit for the College’s past thirty (of a total of forty-­four) consecutive balanced budgets. He also stresses the importance of her role in overseeing Kenyon’s endowment­ investment and tax­ exempt debt programs, two keys to its financial stability.

Although Blanchard, a certified public accountant, retired as associate vice president in 2013, she agreed to take on two new roles at the College. Within her home division, she became a finance advisor; within the economics department, she became a visiting instructor in accounting.

Blanchard is married to Bill Blanchard, a real­ estate agent in Mount Vernon. She has one child, son Nathan D. Leonard of Kenyon’s Class of 1997, from an earlier marriage.

Finally, the College will honor James A. Steen, who is retiring after thirty­-nine years at Kenyon. The man whose name has become synonymous with championship swimming, he began his career at the College in 1975. In the time since then, he has made an already ­strong Kenyon program with a history of conference championships a legendary one at the national level.

During Steen’s tenure as head swimming coach, which was marked by a scientific approach to the sport that he labels "Total Performance," the men’s team won twenty­-nine consecutive National Collegiate Athletic Association (NCAA) Division III championship titles while the women’s teams won twenty­-one. That record of fifty titles surpasses those of any other coaches in any NCAA sport.

Steen is a fourteen-­time winner of the NCAA’s Division III Coach of the Year Award, a seven­-time winner of the American Coaches Association Award for Excellence, and the 1994 recipient of the National Collegiate and Scholastic Swimming Trophy, presented by the College Swimming Coaches Association of America. His swimmers have won even more awards, including a healthy percentage of the sixty-five NCAA Postgraduate Scholarships presented to Kenyon athletes since the awards were first offered in 1970.

Steen’s impact on collegiate swimming now extends well into the succeeding generation of coaches. Among the top teams the College’s swimmers now face at each year’s national championships are several coached by Kenyon alumni, at such perennial contenders as Denison and Emory universities.

A graduate of Kent State University with a master’s degree from Miami University, Steen is married to Marcie A. Steen, a biology teacher at nearby Mount Vernon High School. The Steens are the parents of two daughters, Sarah Steen Holcomb, a 2001 alumna of the College who is now a high­ school Spanish teacher in Chicago, Illinois, and Victoria "Tori" Steen, a 2004 graduate of Kenyon who is a physician assistant in Columbus, Ohio. 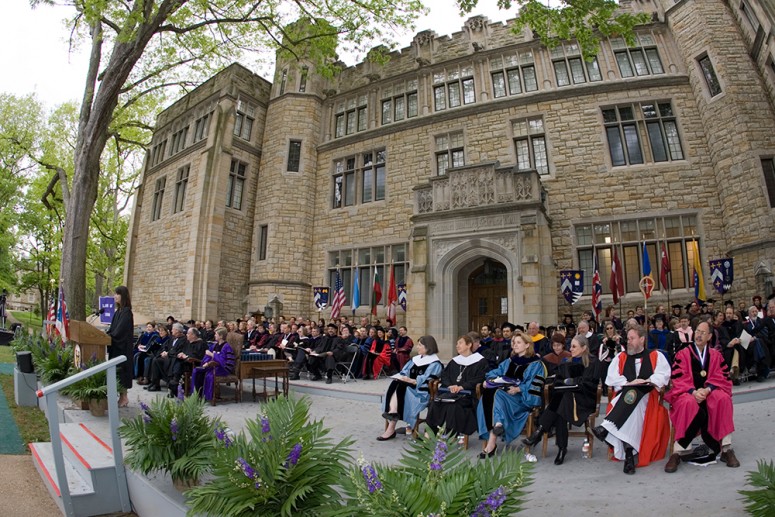 Natalheex3 - 7 years ago
Join our path forward.
Give To Kenyon
Loading