After rattling off two convincing wins over the weekend, the Kenyon College men's soccer team grabbed the attention of national voters, who boosted the Lords to the No. 4 spot in Tuesday's release of the National Soccer Coaches Association of America/Continental Tire NCAA Division III national poll.

The Lords moved up ten spots from their NSCAA preseason No. 14 rank and now trail only No. 1 Messiah College, the defending national champion, No. 2-ranked Loras College, and No. 3-ranked St. Lawrence University. Kenyon is one of three ranked teams from the North Coast Athletic Conference. Ohio Wesleyan University, previously ranked No. 8, dropped to No. 22 after a loss to Calvin College, while DePauw University went 1-1-0 over the weekend and moved up to the No. 23 spot.

Kenyon earned its lofty position by defeating previously No. 18-ranked Carnegie Mellon University, 3-0, on Saturday. The Lords then delivered a 4-0 victory in Sunday's game against La Roche College. While those two wins certainly made a huge impact, the current ranking also reflects the success of the Lords' 2013 season in which they went 16-5-3 and made a run all the way to the Sweet 16 round of the NCAA Division III Tournament.

Up next for the Lords are road trips to a pair of Ohio Athletic Conference institutions. On Friday, they battle the Cardinals (1-1-0) from Otterbein University, and on Sunday, they'll travel to Heidelberg University to take on the Student Princes (2-0-0). 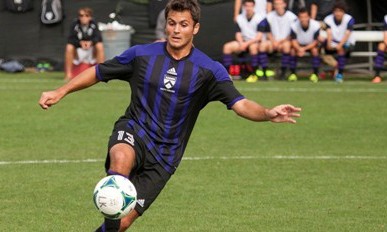