Taylor Hazan ’19 of Charlotte, North Carolina, always has loved libraries. “I grew up in them; I lived in libraries. I was that kid who was always reading,” she said. “That was one of the big things that inspired me to maybe become a librarian.”

The English and anthropology major had the chance to explore this possibility during winter break, when she completed a job shadow facilitated by Kenyon’s Career Development Office. She spent a day in New York City learning about the career of Susie Heimbach ’98, a children’s librarian at the New York Public Library’s Mulberry Street branch in Manhattan’s SoHo neighborhood.

Though Hazan already has gained library experience working at Olin Library on campus, she “wanted to see what working in a public library, especially one in a city environment, would be like.” By shadowing Heimbach, Hazan learned how a neighborhood library can be a vital resource for the community. “Even at 10 in the morning, there was a line of 15 people out the door waiting for us to open the doors,” she said.

Heimbach, who has hosted multiple Kenyon students for job shadows, also finds the experience fulfilling. “It’s really fun to get to still have that connection with the school,” said Heimbach, who also majored in English at Kenyon. “It’s also fun to see my job with fresh eyes, and to show off what I do a little bit.”

In between hosting story time programs for toddlers and assisting older children with research questions and homework, Heimbach and Hazan discovered “weird little connections” between their Kenyon experiences, such as the enduring popularity of Farr Hall apartments and “cultural differences” between North and South campus. In the end, Hazan felt optimistic about a possible career in libraries. “This was really cool because for the first time, I’m able to see myself somewhere,” she said.

More than a dozen Kenyon students completed winter break job shadows with the help of parents and alumni.

Liz Eder ’17, a biology major from Solon, Ohio, took a break from studying for the MCAT in preparation for medical school to spend three days shadowing Christian Ball ’96, an emergency physician affiliated with the Cleveland Clinic. For four to five hours each day, Eder was at Ball’s side as he assessed incoming patients, retrieved lab reports and advised patients on their treatments. Though she previously volunteered at nearby Knox Community Hospital (where Ball also cut his teeth as a Kenyon student), Eder was eager to see how a hospital in an urban setting functioned and how doctors’ roles compared at each institution.

Ball, who also majored in biology and who has hosted three Kenyon students for job shadows, enjoyed the chance “to chat about Middle Path, the goings-on on the Hill,” and to bond with Eder over shared experiences in Greek organizations and on athletic teams.

“I think it definitely made me more interested in emergency medicine, specifically,” Eder said. “This was probably the first time I ever had this close of a partnership with a doctor, versus just volunteering or helping out. … I don’t think I would have been able to experience that somewhere else.”

As a longtime fan of daytime TV, Amanda Simpkins ’18, a film major from Tuckerton, New Jersey, was excited to spend several days shadowing Mark Schneider P’08 ’11, an executive producer on the ABC cook-and-talk show “The Chew.” Simpkins was in the studio, either in the control room or on the set, for the taping of several episodes, and she had the chance to sit in as a member of the studio audience. In addition to meeting several of the program’s stars, she “attended some meetings called run-downs, where groups of producers discussed the plans for whatever show would be taping the next day,” Simpkins said.

Simpkins was able to stay in New York City with the help of Bob McCabe P’14 and Dorothy Caeser P’14, who provided lodging close to ABC’s studios. The experience helped Simpkins “feel more confident about the potential of living in a city later” in order to break into the film and TV industry, and it gave her the “first significant tick on my resume.”

This was the first time Schneider hosted a Kenyon job shadow, and he and his staff tried to give Simpkins “the best multi-faceted view we could” of the “day-to-day working of a television show from the top level.” “It was truly a pleasure to have her with us,” Schneider said. “Supporting the school and the students this way is a unique experience.” 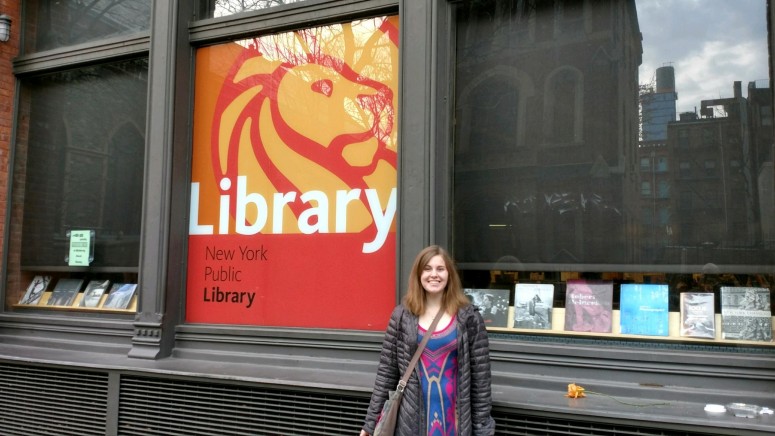 Kenyon alumni and students gather in Cleveland to boost their career networks.

More about Kenyon students and alumni networking in Cleveland 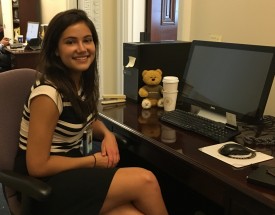 Whether blogging about music in Brooklyn or pounding out memos for Joe Biden's staff in D.C., Kenyon students took full advantage of their summer breaks.