For those seeking a seat among the sunlit tables of Thomas Hall from 8:45 to 9:30 a.m. on a Tuesday, it might be surprising to find the familiar faces of Chaplains Marc Bragin, director of Hillel House, and Rachel Kessler ’04, the head of Harcourt Parish — not stationed at a podium or featured in a campus-wide email, but sitting among students, eating fried eggs and discussing the merits of “VeggieTales.”

For the past three years, Bragin and Kessler have made a point to break with the usual structure that defines student-chaplain interactions by holding an open and conversational weekly event entitled “Chat with the Chaplains.”

“When we first started, it was a way to reach out and connect with students,” Bragin said, “because it’s nice to be on campus and have folks realize we’re just regular people.”

The chaplains’ aim with the breakfast is to foster ordinary conversations on topics ranging from the habits of Kessler’s dog, Bilbo, to the rules of Episcopopoly, an Episcopal Church-themed board game. “To chat with the chaplains doesn’t have to be a spiritual crisis or anything overtly religious at all,” Kessler said, “but can be as simple as talking about the TV shows we’re watching.”

Unsurprisingly, the conversations do tend to shift into topics of spirituality and theology, but in a casual and free-flowing context. “It’s a way to show that if you’re a person of faith or you’re a person seeking some kind of spirituality, how to intertwine that in your everyday life,” Bragin said. “And Rachel and I try to model that as best as possible.”

The chaplains sit together with the hope of creating a spiritual community at Kenyon that is not bound to any specific religious group. “I think it’s a good thing for students to see people representing two different faith traditions just being out and eating with each other and connecting,” Kessler said.

For Kiran Varma ’22, a regular attendee of the chats, it is an opportunity not only to personally familiarize themselves with the chaplains, but to gain a fuller understanding of what faith means on Kenyon’s campus.

“I think that there’s a lot of insight into the lifestyles or the ethics that different faiths promote that can only really be gained through experience outside of a clerical or ecclesiastical setting,” Varma said. “It is a valuable resource in assessing one’s own goals in pursuing spirituality and just expanding one’s own perspective of the community.” 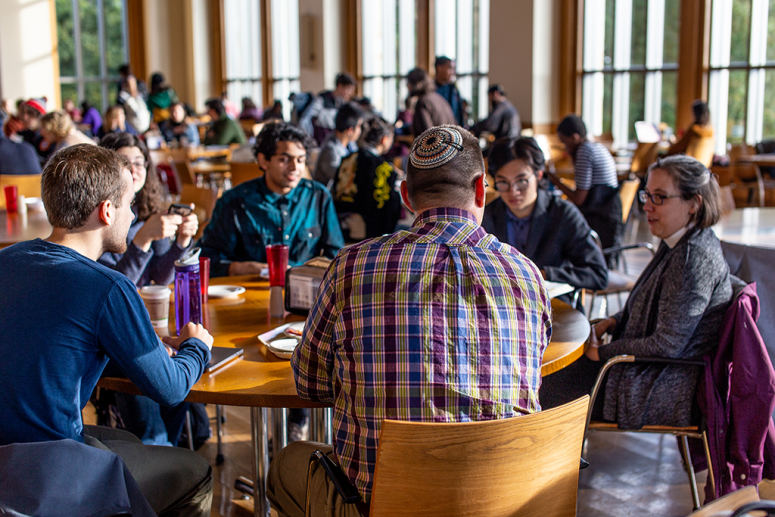