Note: The following story was originally published in the Fall 2011 issue of the Alumni Bulletin. On May 10, 2019, a special Friday Cafe was held in memory of S. Joyce Klein, who passed away on Feb. 4, 2019. At the time, she was living in Maine, where she and her husband, Professor of English Emeritus Bill Klein H’16, and their children, Thomas Klein ’90, Anna Klein-Christie ’93 and Michael Klein ’99, had spent their summers for many years. All profits from the special Friday Cafe, as well as additional donations, will support TRI for a Cure, an annual all-women’s triathlon that has raised more than $14 million for the Maine Cancer Foundation.

Two additional events will celebrate Klein’s life on Saturday, May 11. From 3 to 5 p.m., community members are invited to gather in Kenyon’s Bolton Theater to share reminiscences of the woman who also helped to found Gambier’s annual Craft Sale and the College’s Middle Path Day, and served as a mainstay of Habitat for Humanity, the Knox County Democratic Party and the Knox County Hunger Committee. Light refreshments will be available. Following the Bolton Theater gathering, all are invited to attend a potluck dinner at the Harcourt Parish House from 5 to 8 p.m.

Do you remember the first signs of the weekend in Gambier? The sounds of the Pealers emanating from the bell tower every Friday afternoon? Of course. The concluding syllables of the last class of the week? Naturally. For many people, though, one of the great pleasures marking week’s end arrives midday, as classmates and colleagues stream towards the Parish House for good company and a delectable lunch at Friday Cafe.

Deep into its fourth decade, Friday Cafe is a Kenyon social tradition ranking right up there with First-Year Sing and Philander’s Phling. It brings together the Kenyon community — students, faculty, staff, alumni, and townsfolk — and draws farther-flung diners for a sophisticated vegetarian menu prepared by chefs and caterers Joyce Klein and Peggy Turgeon, both longtime community members.

Fred Baumann, professor of political science, knows exactly how long he has been eating here. “Thirty-one years, since 1980,” Baumann said, without hesitation. “It’s a big institution that makes a real difference in how you feel about the College and the community. Its consistency and longevity have been amazing.”

Mount Vernon Mayor Richard Mavis and his wife Peggy are among the many non-academics — “real people,” one professor calls them — who are regulars. “It’s like the farmers’ market on the town square — you see everybody there,” Mavis said. “I think it fosters a closer relationship between the College and the community.” At 83, College Township trustee and retired school teacher Jim Ingerham of Gambier is one of the most loyal patrons. “It’s the best restaurant in central Ohio,” he said.

The appeal starts with homemade-from-scratch food — soups, entrees, salad and desserts. From dozens of choices, Klein and Turgeon plan weekly menus at the beginning of each semester to ensure variety. Heaven forbid they should serve almond pound cake with strawberries and cream two weeks in a row.

The cuisine might be described as rib-sticking vegetarian comfort food, and diet food it isn’t. The fare, rich with eggs, cheese and sugar, ensures that carnivores never miss the meat. “You pay $6 for a home-cooked meal and it stays with you the rest of the day,” said recent graduate Danielle Bishop ’11. “I had to scrimp and save as a student, but this was the one thing I was willing to spend money on.”

Quiche is among the most popular dishes. One loaf of the Georgian cheese bread — another favorite — is made with a pound and a half of Muenster. The desserts include a variety of cakes, tortes and scones, and no Friday Cafe would be complete without a finale of cafe chocolate, a rich mix of coffee, whipped cream and Klein’s dark cocoa-based syrup.

But Friday Cafe is more than a place to eat. It’s a scene. Food is the catalyst for a gathering that helps close the work week and kick off the weekend with something a little special. Jennifer L. Nichols, Mellon postdoctoral fellow in Arabic, found it the ideal place to distribute birth announcements of her baby boy. Students love it because it’s not the dining hall. Bishop actually came here on a date. “He paid — that’s how I knew it was a date,” she said.

Alumni returning from far-flung places make lunch here a mandatory homecoming activity. “I came all the way from Florida to eat here,” said Justin Cox ’09. He was only slightly exaggerating. Cox and his former classmate, Johanna Ralston ’09 — school teachers in Miami, Florida — returned to campus for a concert, but booked a late-night Thursday flight just to make sure they would be here in time for Friday Cafe. “It happened, and it feels so right,” said Ralston, at her first cafe in two years.

It is difficult to pinpoint exactly how far back the cafe goes, but its co-founder Klein has a pretty good idea. “My youngest turned 35 in June and we started the cafe when I was pregnant, so I think we are in our 35th year, but it could be our 36th. Either way, once we start doing something, we don’t stop,” Klein said.

Near the time Elvis performed his last concert and Star Wars opened in the theaters, Klein and Turgeon launched Friday Cafe as a semi-annual “dessert only” on the porch of Farr Hall to bring together gown and town. Faculty wives, including Klein and Turgeon, made the desserts. (Klein is the wife of William F. Klein, professor of English, and Turgeon is the wife of Thomas S. Turgeon, professor emeritus of drama). The menu gradually expanded and the locations changed from a space now occupied by the Middle Ground coffee house and the defunct Alumni House to the cafe’s current home in the Parish House.

The effort led to professional catering careers for Klein and Turgeon when former president Philip Jordan and his wife, Sheila, recruited them to cook for official College events. Baumann credits their culinary skills with maintaining a semblance of civility at some of his political conferences. “Things could get pretty contentious,” he said, “but dinner always made everyone happy.”

Klein and Turgeon operate Friday Cafe as a business with a paid staff that always includes some students. After expenses, Klein and Turgeon earn a meager profit — typically about $35 each — that they often donate to charity. They do it more for love than money. “We never thought it would come to this or last this long,” Klein said. “It’s fun to cook for people and be at the center of social gathering.” In truth, however, their motive might be a little more self-serving. “We both like to eat,” Klein said. 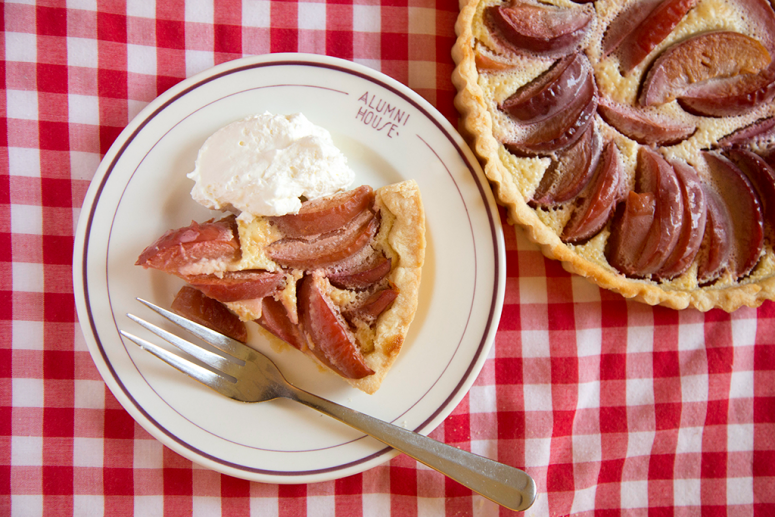