Most visitors to art museums expect to walk slowly through a succession of galleries, quietly viewing a series of works presented in orderly rows. Meanwhile, most audience members sitting down for a musical theater performance expect an hours-long song and dance extravaganza.

A new project at Kenyon’s Gund Gallery subverts both of those expectations. Called “Unframed,” the series of four original mini-musicals reimagines the narratives embedded in works from the gallery’s permanent collection in an intimate and interactive performance.

Conceived and directed by Associate Professor of Drama Anton Dudley, “Unframed” will be presented at the Gund Gallery in four one-hour performances at 6 p.m. and 8 p.m. on both Friday, Nov. 15, and Saturday, Nov. 16. Each of the 10- to 15-minute musicals was written by a different composer with whom Dudley had worked in previous collaborations.

Despite their short duration, each musical tells a complete story, and all were inspired by one or more works of visual art — a drawing, a print, a sculpture and a series of three photographs — in the collection, selected by Dudley’s collaborator, Curator of Academic Programs Jodi Kovach.

“We have four very different composers with four very different styles,” Dudley said. Each piece is written in a different genre — one musical will reflect classical music, one will draw from hip-hop, one is in the style of contemporary opera and one is reminiscent of traditional Broadway-style musical theater.

The collaborators are based in New York, Los Angeles and London, adding the additional challenge of writing music based on works they had not seen in person. “We spoke with the composers on the phone, just talking about the artwork,” Kovach said. “It was just a way to get them inspired and thinking about what they saw, and so it was really kind of an open conversation.”

“The audience will be in the center of all the musicals, which will move around them as we move from work of art to work of art,” Dudley said. “It’s sort of an immersive experience. Since the piece is called ‘Unframed,’ the idea is that these works of art are coming out of their traditional way in which you’re being asked to perceive or relate to them.”

This type of Gund Gallery collaboration is not unique to Kenyon’s drama department; other departments, including music and dance, have partnered with the gallery on projects and performances in the past. Dudley was inspired to collaborate with Kovach after taking previous classes into the gallery for educational visits.

“That got me excited to be in the gallery and to want to write in the gallery,” he said. “I haven’t been at an institution before where the [on-campus] gallery is charged with being primarily an educational tool and linked to experiences in the classroom.”

Dudley also aimed to “represent more voices than I think have been traditionally represented in performance on campus” by basing the musicals on “works that had diverse representation and perspectives.” In addition to working with colleagues like Kovach and choreographer Balinda Craig-Quijada, professor of dance, Dudley brought a wide range of talented students into the production as actors, musicians and crew. Lauren Redman ’22 serves as stage manager, and music director Ben Weinman ’21 will oversee a live band comprising piano and cello.

Admission to “Unframed” is free and open to the public, although seats can be reserved by contacting Lauren Redman at redman1@kenyon.edu. The production is made possible, in part, by the Gund Gallery Board of Directors, Ohio Arts Council and a Kenyon faculty research grant. 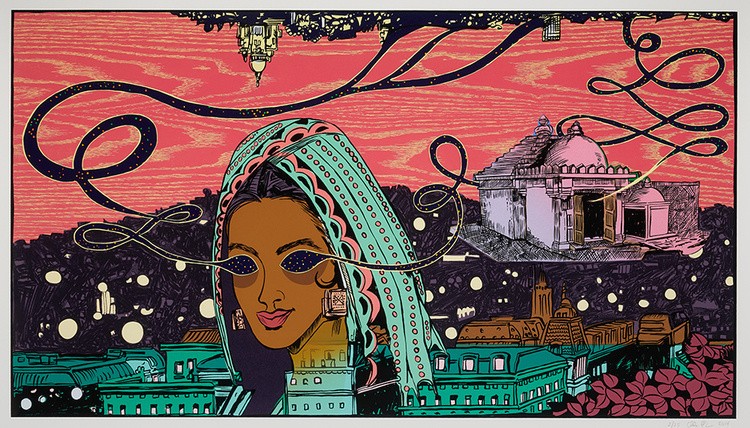