Jensen, who joined the Kenyon faculty in 1980, was praised for the deep and abiding friendships she has built with her students. One said Jensen has "a keen ability to make a big room feel small, where a class discussion can feel like it is between just two people."

Her faculty colleagues lauded her skills. "With an unparalleled ability to offer guidance and support while making you feel as though you can do it all on your own, Pam does much more than impart knowledge," one wrote. "She develops in her students the confidence to seek knowledge on their own, the judgment to recognize it when they see it, and the joy of engaging in such an exploration."

Jensen was the first woman to become a full professor of political science at Kenyon and was, in 1999, named the first Harry M. Clor Professor of Political Science. She teaches courses in the history of political philosophy and on politics and literature. Her recent research has been on Rousseau, though she continues to publish on Shakespeare as well.

Hofferberth joined the chemistry department as an assistant professor in 2005. He was praised for his productive research agenda, his commitment to undergraduate research, and his success in mentoring students. His students applaud his contagious "enthusiasm and intensity," his ability to explain complex and abstract material, and his gift for teaching others how to learn. His classes are known for being focused and demanding but balanced by a sense of humor. To quote his students, he is "awesome" and "amazing."

A faculty colleague said Hofferberth is "simply a model for teaching excellence in chemistry."

In addition, Hofferberth was lauded for contributions to the larger Kenyon community. He has served as the director of the Math and Science Skills Center for six years. He has participated on numerous committees and has been active in the Kenyon Academic Partnership and Kenyon Educational Enrichment Program. Early in his career Hofferberth was awarded the Harvey F. Lodish Faculty Development Chair for junior faculty in the natural sciences.

He began his career as a research scientist in the private sector and, after a year, he became a visiting assistant professor at Kalamazoo College. John has taught ten different courses at Kenyon, including four different laboratory courses. He conducts research concerning the synthesis of insect semiochemicals. He earned his undergraduate degree in 1996 at Miami University and his doctorate in organic chemistry from the Ohio State University in 2002.

The Trustee Teaching Excellence Awards carry a $5,000 stipend and were established by the Kenyon College Board of Trustees in 1999 to promote excellence by raising the visibility of outstanding teachers. 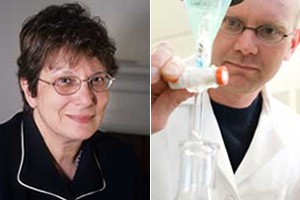