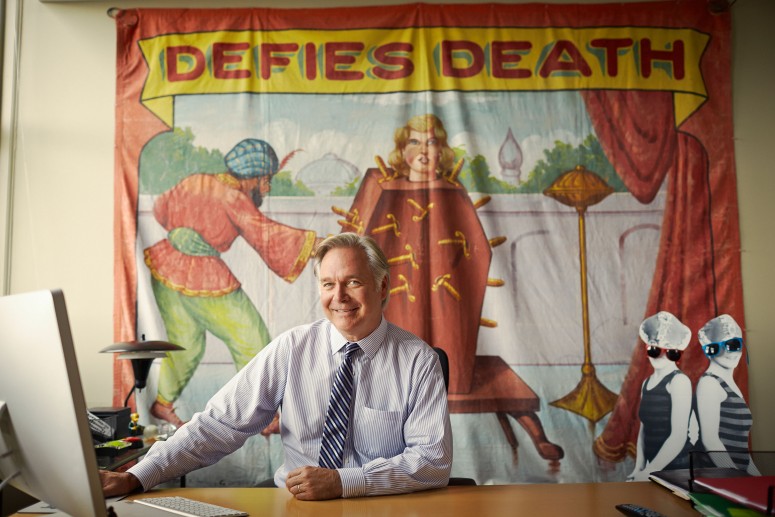 The idea of watching a boy grow up from five to 18 years old within the context of a two-hour film appealed to Jonathan Sehring ’78 when it was pitched to him by director Richard Linklater. Since agreeing to produce the film 12 years ago, the president of Sundance Selects and IFC Films has seen Boyhood evolve from a concept to a critically acclaimed final product. After winning top honors at the Golden Globe Awards, Boyhood was nominated for six Academy Awards, including best motion picture.

When Sehring responded to Kenyon’s interview request, he was sitting on a plane, waiting to fly from the Berlin Film Festival to London for the BAFTA Awards, where Boyhood snagged another award for film of the year.

Q:  What compelled you to take on a long-term project like Boyhood?

A: Boyhood was the third movie I worked on with director Richard Linklater, and I always found him to be a distinctive voice in American cinema. When Rick proposed a “coming-of-age” story of a boy set within the confines of grades one through 12, it really resonated with me. At that time, my oldest son was entering his junior year of high school and my two youngest sons were about the same age as the film’s protagonist, so I understood the drama of everyday life that he was hoping to capture. The long-term approach felt so unique in terms of cinematic history, that it was easy to say, “Yes, let’s do it.” It struck me as a wonderful undertaking, regardless of whether I would still be around for the finish (12 years is an eternity in the entertainment industry).

Q:  You've been involved with this project since its inception in 2001. How did the project change over time?

A: What is really amazing about the project is how much of it didn't change over time. The story itself is very much the one Rick and I sat down and discussed at the end of the summer of 2001, primarily because it is semi-autobiographical and very personal to Rick. What we didn’t know was what direction the lives of Ellar Coltrane (the actor who played Mason) and Lorelei Linklater (the actress who played his sister, Samantha) would take. Rick tailored each character's development with input from the cast members as the years went on.

Q:  Did you foresee Boyhood as an awards contender?

A: Awards are such an odd thing, particularly in the arts. We didn't go into Boyhood thinking about awards (and I never have gone into production on anything thinking about awards). So much has to go right just to get a movie made and so much more has to go right (along with a great deal of luck and maybe a little magic) for a movie to be good, so thinking about awards before, during or even after a movie is completed is pure folly.  While I honestly can say that everyone involved in this movie thought we were making something special, we all thought it would be special only to us. We were more than a bit overwhelmed by the incredible response the movie received when we screened it at Sundance in 2014. The critical response to the film since has been incredibly gratifying.  I feel great pride in knowing that Boyhood is a movie that will stand the test of time, and that is not something one can say about a number of award-winning movies.

Q: How did your liberal arts education at Kenyon prepare you for your career in entertainment?

A: No film program existed while I was at Kenyon (I was a projectionist for the one film history course that was offered at the time). However, I was a member of the Kenyon Film Society and we programmed as many classics and films from around the world that we could. I majored in English and took an extensive number of art history courses, which helped me develop a strong critical eye and sense of story and structure. I never took a drama course while at Kenyon (one of my biggest regrets about my years at Kenyon was not taking as many courses in as many disciplines as possible), but I never intended to be a member of the entertainment industry when I graduated. I always thought I would have a career in art restoration (like Donald Sutherland in Don't Look Now) or become a professional bird watcher (I also took a number of biology courses).