It had been upward of half a century since they were students, but the laughter and smiles hadn’t changed much from memory and graduation photographs. Thirty-one alumni and their spouses gathered on campus in April to celebrate their post-50th reunion with tours of campus, lectures, a reception at Cromwell Cottage with President Sean Decatur and dinner at Peirce.

The graduates have shaken hands with global figures, visited all corners of the earth and influenced countless minds and lives, yet conversations soon turned to their four years at Kenyon. Some alumni, such as Allen McCormick ’55 from Indianapolis, come back often. His wife, Mary Ann, who came with him to this reunion, admits she was baffled by his need to return to Kenyon and his fondness for his alma mater. “I didn’t quite understand it at first,” she chuckled. “But now I get it.”

The alumni toured familiar and newly constructed portions of the campus, said Scott Baker ’94, director of alumni and parent programs. “Among the many highlights were tours of the new Horvitz studio art building and Gund Gallery, a lecture by Kenyon historian Tom Stamp ’73 on the fires that shaped Kenyon, and visits to classrooms with students.”

Brad Bennett ’57 particularly enjoyed meeting with students. “Although I enjoyed everything, I especially appreciated the chances to interact with students at the lunch and in the classes that I attended. I liked the wide choices of classes offered and found them very interesting.”

Music featured prominently in their visit as well, with a rousing rendition of “Philander Chase” heard at one of the dinner tables on Thursday night, followed by an impromptu piano performance by stride-style virtuoso Wayne Shannon ’58 P’83. Before they left Friday, the alumni joined in Kenyon’s alma mater, “The Thrill,” and at its conclusion, they cheered an old Middle Path greeting of “Pip, pip! Hika!”

Though “Hika!” might no longer be heard on the Hill, McCormick reflected that much of Kenyon remains the same. “We walk down Middle Path and it looks like it did, but it’s even better than when we were here.” 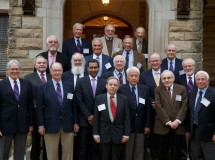 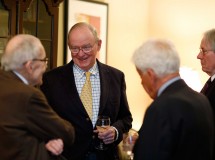 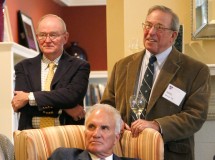 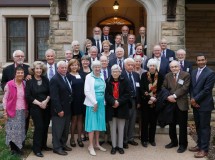