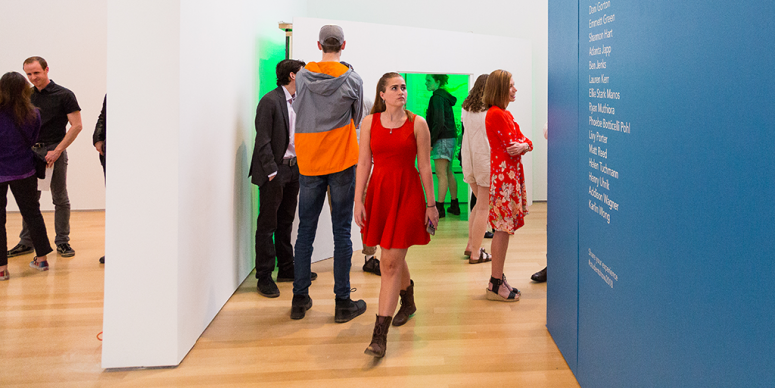 When Dani Gorton ’18 needed inspiration for her senior capstone project, the studio art major looked at her Gambier surroundings and considered how the Hill has influenced her, as a person and as an artist. She turned her reflections into a series of paintings now on display at the Gund Gallery’s annual senior exhibition, which runs through May 19 and includes works from 19 studio art majors.

Gorton’s series of oil paintings, titled “No Place Else,” explores how feelings and emotion can be imbued upon an environment. Each painting is modeled off of a photograph she took in or around Gambier.

“Going back through old photographs became very nostalgic in a way I hadn’t expected,” said Gorton, from New Haven, Connecticut. “Many of the photographs were taken at the same place on the Kokosing Gap Trail that I’ve ran by multiple times, in multiple seasons and at different times of day. There was a memory attached to each picture.”

Gorton also drew inspiration from her “Global Environmental Politics” course in political science, in which she learned about civic environmentalism and the notion that “if you have an emotional attachment to a place, you’re more likely to protect it and preserve it for the future.”

Gambier has become Gorton’s place, a feeling she expresses through her work. “I love it here,” she said. “I hope my paintings are a gentle reminder that we are here and we should appreciate the beauty, the nature, around us.”

Across from Gorton’s paintings in the gallery are works by Shannon Hart ’18, from Harare, Zimbabwe, whose sculpture and performance art exhibit is titled “Bodies of Land.” Hart’s project explores the ephemerality of value, possession and ownership. She feels grateful for the opportunity to exhibit her work in the Gallery’s professional space.

“It’s made us hold ourselves to a higher standard,” she said. “It feels amazing to have your art exhibited in a beautiful space where it can be appreciated and taken seriously.”

Participating in this year’s exhibition are the following seniors:

Also on display at the Gund Gallery, through May 27, is an installation by Assistant Professor of Art Sandra Eula Lee titled “The Bend,” inspired by temporary structures built by Beijing residents.