A series of yield signs in different languages near Rosse Hall. A hammock suspended near Olin and Chalmers libraries. A house-shaped box hanging outside the Church of the Holy Spirit. These are the first assignments for Professor of Art Claudia Esslinger’s art installation class.

The assignment is called “Intervention” and is meant to disrupt, in a way, daily life. “It doesn’t have to be political,” Esslinger said, though some of the projects are. “It can be about the senses or observations.”

Seven students — art and non-art majors — are taking the course. Their installations will be displayed the remainder of this week. The class will have a final exhibit of different installations in Horvitz Hall in December. 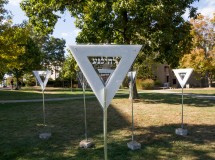 “Portrait of Youth,” by Harrison Curley ’15 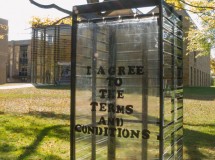 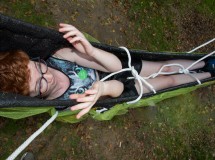