Few things induce as much wonder and awe as watching living creatures glow with their own light. I still feel excitement each summer when fireflies first appear on the lawn of Cromwell Cottage. And when visiting any aquarium, I head straight toward the jellyfish tank. Each glowing organism has its own molecular system for generating light, and the elucidation of the underlying chemistry requires the integration of concepts from organic chemistry, quantum mechanics and thermodynamics. Every Monday evening, 14 students and I convene in my dining room to consider these concepts as part of my seminar, “Jellyfish, Fireflies and Optogenetics: Chemical Foundations and Applications of Bioluminescence.”

Teasing apart the threads of a scientific narrative (and tying them together again) is a skill in which liberal arts students excel. I’m reminded of this as my students and I read research literature, work through problem sets and snack on cookies while pondering the chemical similarities between jellyfish and glow sticks (there are many). The combination of rigorous work in STEM subjects with the rich context of a broader liberal arts education develops students’ ability to see complex issues from a variety of disciplinary perspectives. (This might be one reason why graduates of small liberal arts colleges are over-represented in STEM doctoral programs across the U.S. compared to peers from other types of institutions.) I see this skill at work each week, as my seminar students learn how to relay the importance of their research to practiced scientists as well as to those new to the field.

Whether layperson or expert, we often understand science through narratives that make the complex details of scientific phenomena digestible. In this seminar, we map the overlapping stories of bioluminescence, and in the process gain insight into not only issues of biochemistry but the nature of scientific discovery, the translation of fundamental science into novel applications, and the politics and ethics of scientific research.

Take the jellyfish as an example. (Warning: I’m about to indulge in some geekiness.) One place you could start the story of glowing jellyfish is by examining the calcium ion (Ca2+): the Ca2+ binds to the protein aequorin, causing it to change shape and catalyze the oxidation of a molecule called coelenterazine into an unstable, high-energy structure that features two unpaired electrons (called a “triplet state”). This triplet state releases energy, transferring it to another protein called the green fluorescent protein (GFP) and creating an excited electronic state of GFP that then relaxes back to its ground state by releasing a photon of green light. Boom: The jellyfish glows.

Yet you could also focus the story on the population of the jellyfish Aequorea victoria, abundant in the Pacific Ocean north of Puget Sound. The animal is clear, with a bell that ends in a fringe of tentacles; touching the tentacles causes the once-clear bell to glow bright green (thanks to GFP). As the jellyfish swims, the bell moves in pulsing motions, emitting bright green light. Jellyfish are much more than beautiful, novelty creatures that play a starring role in aquariums — they are also critical components of the ocean’s ecosystem whose recent population explosion may be an important clue to the impact of climate change on marine environments.

Our understanding of the chemical and biological properties of the green glow of Aequorea victoria begins with the work of Osamu Shimomura, professor emeritus at the Marine Biological Laboratory in Woods Hole, Massachusetts (and author of one of our textbooks for the course). A teenager in Japan during World War II, Shimomura lived in Nagasaki, about 25 kilometers from the epicenter of the atomic bomb site. After the war, the pharmacy school of Nagasaki Medical College was relocated close to Shimomura’s home, and he enrolled and received a bachelor’s degree  in pharmacy. He furthered his studies at Nagoya University, where he received a doctorate in organic chemistry for his work identifying the protein responsible for the blue glow of crustaceans commonly called “sea fireflies.” This work caught the attention of researchers at Princeton, where he joined a group studying jellyfish and was presented with the challenge of isolating the materials responsible for their green glow. This required developing new techniques of harvesting jellyfish and carefully but efficiently separating the bell tissue from the fringe of tentacles. After five years of dissection and chemical extraction, Shimomura isolated the protein aequorin, which did produce light, but blue light (as opposed to the green observed in the living systems). After years of additional labor, he isolated aequorin’s partner, GFP, that produces the green light. For this work, the Nagasaki survivor shared the 2008 Nobel Prize in Chemistry.

But the story of GFP has not been limited to jellyfish. Since the 1990s, molecular biologists have cloned the gene for GFP and found ways to insert it into a wide range of organisms, from bacteria to mammals. GFP has become a molecular tag to understand the expression of genes (including genes implicated in diseases such as cancer) and to visualize the function and development of complex biological systems (such as the brain). Martin Chalfie, professor of biology at Columbia University, produced a nematode that glowed green in 1994, starting the GFP revolution (and earning him a share of the 2008 Nobel with Shimomura). Roger Tsien, a professor of chemistry at the University of California, San Diego, used mutagenesis to develop GFPs that glowed other colors (including yellow and blue), expanding the range of applications for the technique, and for this work was the third scientist honored with the Nobel in 2008. The application of GFP to fields in biomedical research has resulted in hundreds of thousands of research articles, new technologies and industries for biological imaging, deeper understanding of fundamental biology, and new therapeutic approaches to several diseases.

Yet, there is one more story here, this one involving a shuttle bus driver in Huntsville, Alabama. Doug Prascher received a doctorate in biochemistry from Ohio State in 1979, then went on to Woods Hole to study bioluminescence. In 1988, he began work to clone the gene for GFP. He was successful, and applied for a grant from the National Institutes of Health (NIH) to support this work and the discovery of applications of GFP. His grant was turned down, and when faced with a tenure and promotion process without external funding, he decided to leave academia. Before shutting down his lab, Prascher sent copies of his cloned gene to Chalfie and Tsien, who then carried out the work that eventually earned both of them a share of the Nobel. Prascher eventually left science altogether and was working at a car dealership as a driver when the 2008 Nobel announcement was made. After the announcement, he was rediscovered, and with championing by Tsien and Chalfie he eventually returned to science, finding work at the University of California. Thus, the story of GFP is also a story of the harsh realities of academic science, the limitations of our systems of funding scientific research, and the power of (partial) personal redemption.

In the study of one protein, we find five different perspectives and five different narratives. Science and narrative, theory and experimentation, discovery and application, problem-solving and human drama: We cover it all on Monday nights in Cromwell. Bioluminescence is at the core of this particular exploration, and serves as an illuminating example of the quintessential liberal arts experience. 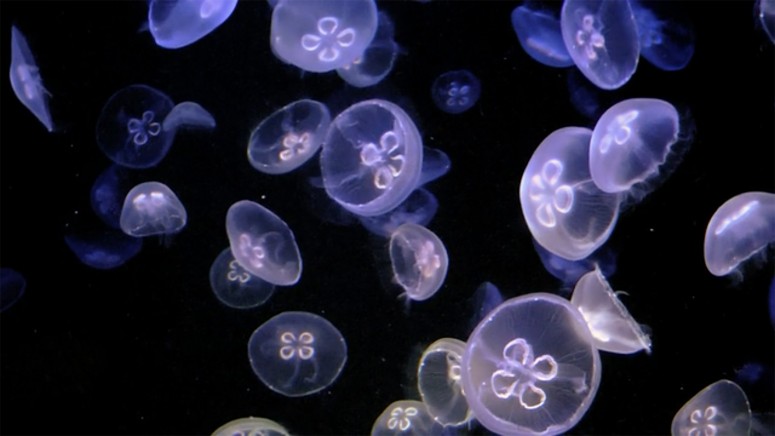