Claire Koelling ’19 has long been fascinated by questions of identity and representation. Growing up in Ann Arbor, Michigan, with childhood friends who were Egyptian American, Koelling noticed how her friends’ culture wasn’t often reflected in her school’s curriculum, or in the museums and galleries they visited. She found this puzzling, especially given her hometown region’s notably large Middle Eastern population.

“In high school, as I was growing my awareness and my interests in art, visual literacy, and representation in the media, museums, and magazines,” Koelling recalled, “I noticed there was a lack of representation of my friends.”

Koelling, an art history and Middle Eastern studies major, now applies this same inquisitive mindset to her Kenyon studies. Her interests in Arabic and Middle Eastern studies have heavily influenced her approach to research for her art courses, which traditionally skew toward study of the Western canon. They also led her to spend last year in Amman, Jordan, where she studied and conducted independent research into contemporary art and art education practices. Her time abroad was supported in part by the Andrew D. Pochter Memorial International Studies Fund, endowed by family and friends of the late Andrew D. Pochter ’15.

As soon as Koelling got her bearings after arriving in Jordan, she dove into the Amman arts scene, frequenting art galleries and attending exhibitions and workshops. Between classes at the University of Jordan, Koelling worked and volunteered with various art- and art education-related organizations, including the Jordan National Gallery of Fine Arts. She assisted with painting workshops for mentally and physically disabled Palestinian refugees, wrote and edited for an online Middle Eastern arts journal, and helped with Amman Design Week, a biannual arts festival highlighting small-scale exhibitions throughout Amman neighborhoods.

All the while, Koelling was conducting observational and qualitative research. “I wanted to learn more about artistic production in the Middle East,” she said. “I thought that focusing on a community that I was going to be living in would narrow my research and enable me to be more intimately acquainted with the community.” It was through this research that Koelling struck a friendship with Lina Khalid, a young Palestinian-Jordanian photojournalist documenting the Jordanian landscape. To Koelling, Khalid epitomized the Jordanian identity.

Koelling wanted to bring Khalid’s art back with her to Knox County, to raise awareness about art produced “outside a Western-dominated paradigm” and to show different global perspectives. With help from the art history department, this semester Koelling produced “Photo Diaries,” a public collection of Khalid’s photographs curated by Koelling and hosted in Kenyon’s Horn Gallery. Scenes of street protest are juxtaposed with stills of refugee camps, showcasing a diversity of identities.

“I want these photos to humanize refugee stories that are often just written in the media. You read numbers of people that populate the refugee camps, but you don’t learn their stories, and you don’t see their faces,” Koelling said.

As part of her project, Koelling also hosted a discussion and interactive photography workshop for local fifth-grade students.

Associate Professor of History Nurten Kilic-Schubel praised the mutuality of Koelling’s curatorial work, noting that Khalid had never before had her own photo exhibition. “It was fascinating that Claire was able to establish this very trusting relationship, and she did her project in a way that really made the artist herself proud.”

Koelling hopes her work will cause others to consider issues of representation and authentic narratives in art. “I would really love to continue to bring back this kind of cultural exchange — in the future, in my career, in whatever respect that may be,” she said. 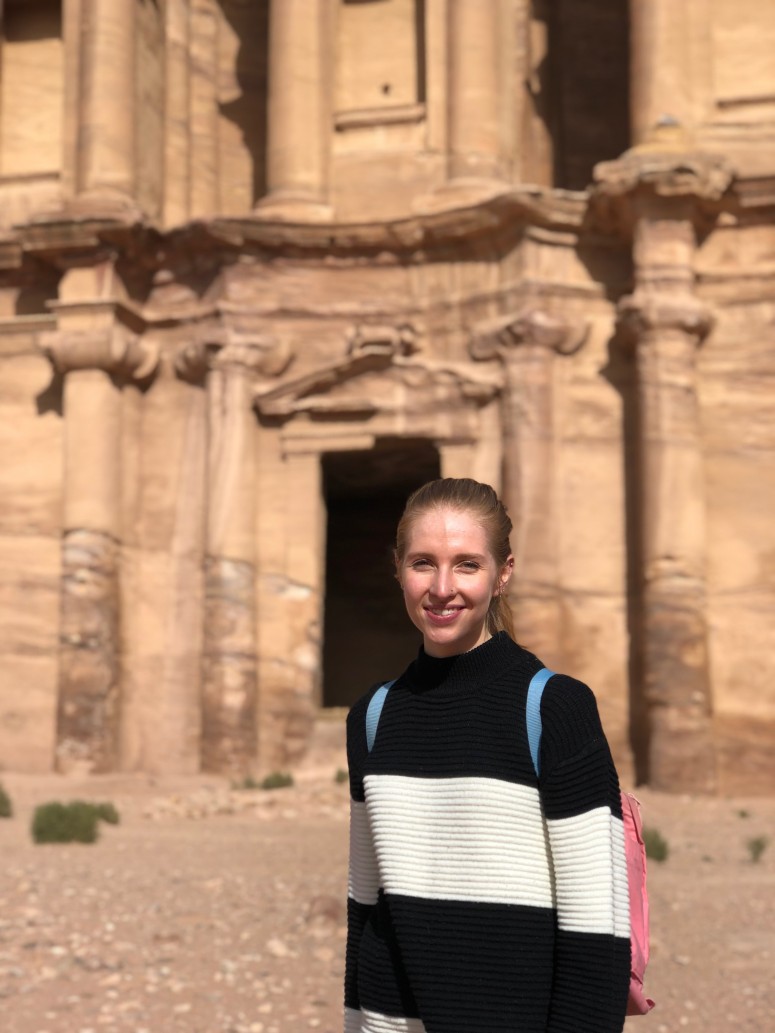 Koelling during study abroad in Jordan.