The 23nd alumna in our series is Abi Barnes ’09, co-founder and CEO of Allergy Amulet. Allergy Amulet is an upcoming portable device that determines whether a food contains certain allergens, earning Barnes — herself a lifelong sufferer of food allergies — a spot on Business Insider’s 2019 Food 100 list. An international studies major at Kenyon, Barnes has written about social, political and environmental issues for the Atlantic, Forbes and other publications, and also holds a law degree from Vermont Law School and a master’s degree from Yale University.

Time management and sleep. Getting enough sleep and knowing when to step away from work to read or exercise has helped me work more efficiently and effectively. There’s a book called “Why We Sleep” by Matthew Walker that I think every doctor should prescribe to their patients.

[Professor Emeritus of English] Perry Lentz. I had a lot of wonderful Kenyon professors, but Lentz was a cut above. I’d liken him to Sean in “Good Will Hunting” or John in “Dead Poets Society.” He really cared about his students, and went above and beyond to help them. When my first article was published many years later, he was the first person I wrote.

I’ve grown to appreciate the value of a liberal arts education. The classics, philosophy, literature, they all instruct on how to lead a good life. A fulfilling life. Studying the classics with Lentz and [Harry M. Clor Associate Professor of Political Science David] Leibowitz has definitely stayed with me and informed my worldview.

Read about the previous woman in our series: Samie Falvey ’96

Read about the next woman in our series: Carla Ainsworth ’95 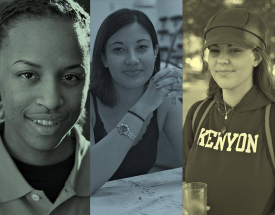