A shooting star crested over the national sports landscape in March 2011, and its name was Shaka Smart '99.

March Madness that year became media madness for Smart, a top story of the NCAA Division I basketball tournament. He coached Virginia Commonwealth University (VCU) to an improbable Final Four finish after the Rams endured a barrage of criticism as an underwhelming tournament entry. When Smart unleashed his ferocious, attacking style and began knocking off opponents like so many major-conference ten pins, the spotlight shifted his way and, liking what it saw, never blinked.

The story was irresistible: The underdog team and its bouncy, well-clad, 33-year-old coach who had rebuffed the Ivy League for Kenyon. The magical name that channels the iconic African warrior Shaka Zulu and underscores a paramount attribute—intelligence. The precise climb up the coaching ranks. The handy collection of quotes (even Emily Dickinson, the Associated Press crowed). The bi-racial background and mostly absent father. The untimely death of a supportive grandfather, and the bright news that Smart and his wife, Maya, are expecting their first child.

A semifinal loss to Butler took no luster from the coach, who promptly signed an eight-year contract with VCU that will make him a millionaire.

Reaching back for perspective on the tournament in the calm of his Richmond, Virginia, office, Smart pulled a John Keats quote from among those he has collected on 120 pages: "A thing of beauty is a joy forever."

Smart chose Kenyon because of a recruiting bond forged with then-basketball coach Bill Brown ("reasons one, two, and three why I came"). Brown had asked Peter Rutkoff, professor of American studies, to call the Wisconsin teenager and sound him out. "From the beginning, Shaka was always there," Rutkoff said. "He knew what he needed in terms of more personal attention, smaller classes, and more intensive academic focus. He was one of the best students I ever had. He took it seriously." Rutkoff would become a mentor to Smart, and the men enjoy a deep-rooted friendship and Father's Day calls.

"Kenyon was a great experience," Smart said. "I got a chance to be around these phenomenal professors. It just really turned me on to school and learning. I never wanted to miss a day of class. I remember oversleeping one time. That was (Michael) Levine's class. Completely an accident. I was so upset."

"I really studied a lot, spent a lot of time at the library. I came to college with a drive to do well that my mother (Monica King) had instilled in me. I wanted to do well for her. I was pretty driven. I really had only two things I spent any time on: basketball and academics."

Smart found time for the young children of Ric Sheffield, associate provost and professor of sociology and legal studies. Smart excelled in Sheffield's "Race, Ethnicity and American Law" course and "put together an extraordinary piece of work" on a research project on interracial families, Sheffield said.
Sheffield's children idolized the Lords hoops star and sought to imitate his deft dribbling and no-look passes. Smart became a mentor to Cuy Sheffield, who attended Pomona College, and showed up at the Mount Vernon YMCA at 8 a.m. one Saturday to watch Cuy play. Cuy was a first-grader. "That indicates the character of this young man," Sheffield said. "He is such an amazing influence on young people."

Some among Kenyon faculty grumbled when Brown hired Smart as an assistant coach at California University of Pennsylvania, where Smart later earned a master's degree in social science. They pictured him as a history professor. "I could have seen myself continuing in academia, but there was that other thing," Smart said. "From when I was 12 years old, I loved the game and looked up to the prominent figures in the game."

As a coach, Smart has impressed the national media with his poise, hands-on and floor-diving practice sessions, and motivating techniques, such as burning a February calendar after a poor stretch of play. He applies the "ACL" approach: aggressive, confident, loose. And he approaches his job with "extreme enthusiasm." Smart said, "I try to bring a lot of energy to what I do, a lot of positivity. I work extremely hard."

"Basketball is a game of mistakes. Hundreds of mistakes are made in every game," he said. Becoming negative is not an option. "Appreciation and gratitude are very important in anything we do." The best part of the tournament, he said, was "seeing the excitement and joy on the faces of our players and our fans."

Smart struggled when Brown left Kenyon for the Division II opportunity after his first year. "I remember crying in my room. I really considered leaving. I just thought about the people I would be leaving—friends and professors. That kept me there."

Brown savors the success of his protégé and is fond of describing Smart walking the campus with backpack and basketball. "I'm so proud of him," Brown said. "He commanded the respect of his teammates. He made them better players. He controlled the tempo of the game." But the affection goes beyond hoops. "He'll always be part of my family. He's a better person than he is a coach, and he's an outstanding coach. The best is yet to come." 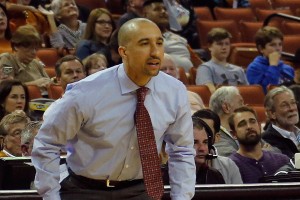 Star basketball coach Shaka Smart ’99 will deliver the Commencement address for the Class of 2017.

Congrats, #ShakaSmart '99! The #KenyonCollege grad is the new basketball coach for the Texas #Longhorns: http://t.co/rLxc5A07lQ