Kenyon students who choose to study and travel on one of the College's own study programs will have an unparalleled experience, finding a rich array of exciting intellectual and cultural adventures designed to integrate meaningfully into Kenyon's liberal arts curriculum.

The Kenyon-Exeter program offers you a once-in-a-lifetime chance to study with British students and faculty at the top-ranked University of Exeter even as you enjoy the focus, intensity, and intimacy of a Kenyon-style seminar under the familiar guidance of a member of the Kenyon English department.

For the past forty years, Kenyon students have travelled to southwest England as part of the year-long Kenyon-Exeter Program. At the University of Exeter, they enjoy full access to classes in the Department of English, part of the larger College of Humanities, which also houses the departments of Archaeology, Art History and Visual Culture, Classics and Ancient History, Drama, Film Studies, History, Modern Languages, and Theology and Religion. Students simultaneously enroll in the Kenyon-Exeter Seminar taught by Kenyon faculty and focused on a syllabus that capitalizes upon the extraordinary opportunity for cultural and travel experiences in Britain, sponsored and funded by the program.

The Department of English and the College of Humanities are based at the University of Exeter’s Streatham Campus, a lively academic community of about 10,000 undergraduates and 2,600 postgraduates situated on beautifully landscaped grounds at the city’s edge.  Ranked in the top five U.K. English Departments by several national surveys, and consistently winning top marks in the National Student Survey for student satisfaction, the Department of English offers Kenyon students an array of course choices in literary and cultural history, creative writing, film, and film-writing. Kenyon-Exeter students enjoy full access to the curriculum, working alongside their British counterparts in such modules as “Writing the Short Film,” “Charles Dickens and the Condition of England,” “Romance from Chaucer to Shakespeare,” “Advanced Critical Theory,” “Desire and Power:  English Literature 1570-1640.”

Outside of class, students at the University of Exeter enjoy an extensive array of extra-curricular clubs, sports, and societies, where many Kenyon-Exeter students find new friends and new pastimes.  The Guild of Students sponsors dozens of club sports—from American football to cricket to sailing to volleyball—and over 200 different clubs and societies, including Amnesty International, the Exeter Student Volunteers, the Soul Choir, the Game of Thrones Society, the Pearshaped Society (an online music magazine), and the Exeter Revue (a sketch, stand-up, and improv comedy club that has performed at the Edinburgh Fringe Festival).  A perennial favorite among Kenyon-Exeter students is the “Out of Doors Society” which organizes weekly expeditions to nearby Dartmoor, Exmoor, and the Southwest coast, and, several times a term, weekend adventures further afield to places like Brecon Beacons and Lands End.  See the variety of club sports and student societies at Exeter.

Because the Kenyon-Exeter program aspires to full integration of classroom work and co-curricular travel, the city of Exeter, the County of Devon, and all of England and the British Isles will become the focus of your studies.  Exeter is a city layered with history, from Roman ruins to a stunning medieval cathedral to quays that evoke the great seafaring traditions of Britain’s southwest.  Exeter is also a vibrant commercial center whose 120,000 residents enjoy live music, clubs, pubs, art house and commercial cinemas, museums, and a professional theater company housed on the University of Exeter campus. London is just over two hours away by rail, and train and bus links to major British cities are numerous. Plus, Exeter’s airport offers inexpensive air travel to European destinations, perfect for those who wish to travel to the continent independently.  Just outside of Exeter—a mere half-hour by train—lies the beautiful, ecologically diverse Atlantic coastline (cobbled shores, sandy beaches, towering cliffs), not to mention two spectacular national parks (Dartmoor and Exmoor) and scores of historic villages, country houses, archeological sites and castles. 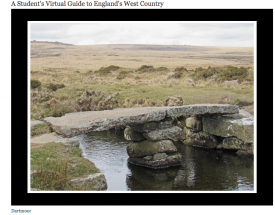 Traveling the literary landscape of the UK is one of the most exciting aspects of the Kenyon-Exeter Program. As part of the Kenyon-Seminar, 2015-16 Exeter students developed this literary guide to Southwest England.

Student's guide to the West Country. 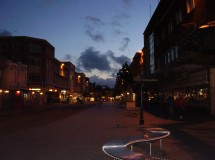 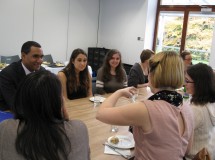 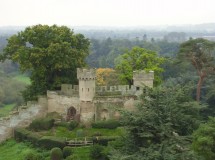 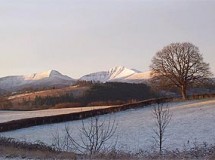 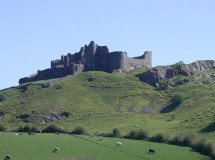 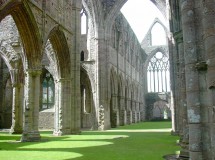 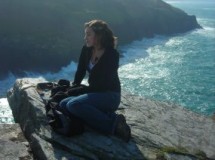 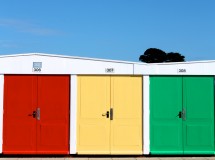