The information below is intended to raise awareness and aid understanding of LGBTQ+ terminology and issues.

Each of these terms and definitions have been researched, analyzed and consulted upon based on perspectives, cultural sensitivity, common usage and appropriateness. Terminology, definitions and meaning for people change overtime, and this list should be merely a guide toward understanding and not the sole basis of acquiring the knowledge that encompasses a LGBTQ+ diverse community. Each person or community may have their own meanings and/or different terminology. We encourage you to ask first and do not let definitions to generalize an individual or population.

There are a variety of gender identities besides those that fit within a gender binary. Here are a few common words to know:

Understanding the prefixes below can help you more readily understand some sexual identities in the LGBTQ+ community. For more information, check out the other resources on this page.

The table below can help you understand more traditional pronouns and how to use them in conversation.

The table below can help you understand newer pronouns and how to use them in conversation.

*Based on gender-neutral pronouns used by the mathematician Michael Spivak.

Explore the practical resources below to help broaden your understanding of the LGBTQ+ community. Please feel free to direct any questions to the Office of Diversity, Equity, and Inclusion. 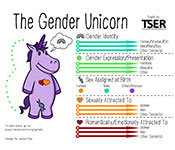 Another illustration of the differences between sex assigned at birth, gender expression, gender identity, and gender attribution by GLSEN. View high-resolution PNG.

An expanded glossary of LGBQ terminology, complete with terms to avoid, preferred terminology and more from GLAAD.

An expanded glossary of transgender terminology, complete with terms to avoid, preferred terminology and more from GLAAD.

Guide to Being an Ally to Transgender People

An guide (PDF) on how to be a strong ally to the transgender community from the National Center for Transgender Equality.

A quick tip sheet for understanding, respecting and supporting the non-binary community from the National Center for Transgender Equality.